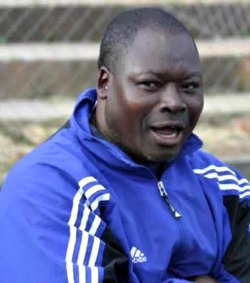 A Kuda Musharu first half double was all that was needed for How Mine to dismiss Moses Chunga’s troubled Chiredzi FC in a mid-week Castle Lager premiership match played at Chishamiso Stadium Wednesday.
The defeat is the fifth successive defeat by the premiership debutants.
Musharu, recently on trial at AmaZulu in the South Africa’s Absa Premiership, scored in the 44th and 45th minutes before forgotten former Dynamos forward Norman Maroto pulled one back in the 89th minute.
The win ensured How Mine moved off the bottom three after only their second win of the season to stand at number seven with seven points for their efforts while Chiredzi remained in 15th place with one point after four losses in a row.
At Maglas, Shabanie Mine benefited from an 11th minute penalty converted by goalkeeper Victor Twaliki to subdue Bantu Rovers 1-0 and temporarily move into second place on the log standings ahead of Thursday’s four league matches.
Siza Dube handled in the box and Twaliki stepped up to beat his opposite number Brighton Chipula.
Shabanie Mine now have nine points, the same with leaders Dynamos, but have shipped in more goals.
Elsewhere, ZPC Kariba and FC Platinum drew 0-0 at Gwanzura Stadium.
Premiership activity continues Thursday with giants Dynamos and Highlanders both in action.