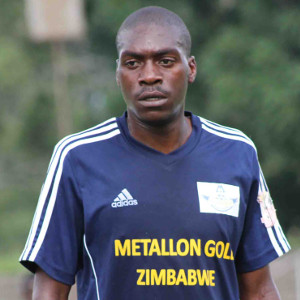 HOW Mine striker and last season’s joint top goalscorer Kuda Musharu has arrived is in South Africa for a week-long trial at Mpumalanga Black Aces in hopes of joining the club next season.
Musharu topped the Premiership scoring charts in Zimbabwe this past campaign with 18 goals in all competitions for How Mine.
Aces have invited Musharu for an assessment with a view to potentially signing him for 2015/16 as they have exhausted their foreign quota for this season.
How Mine chairman Mlondolozi Nkomo confirmed the striker was in South Africa for trials and would sign a pre-contract deal with the club if he impresses.
AmaZayoni have already indicated their desire to sign another striker after losing Mabhuti Khenyeza to Golden Arrows, while they are also considering cashing in on another forward, Zimbabwean international Tendai Ndoro if they get a satisfactory offer from Orlando Pirates.
Ndoro, who had also been linked with Mamelodi Sundowns, was expected to complete a cash and swap deal with Pirates’ Aubrey Ngoma who is eyeing a permanent move to Aces.
Aces media manager Gordon Masondo said Ndoro was still very much part of the club.
“He was at training; he is our key player. Tendai will be here and if he does leave in the future we will be the first to tell people that he is going.”Advertisement