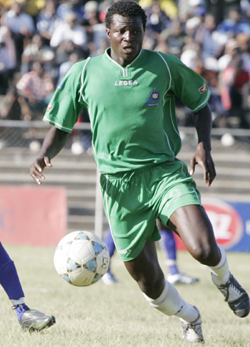 ZIMBABWE international striker Nyasha Mushekwi is back in South Africa on an early break, as he continues with his rehabilitation following an injury he suffered earlier this year.
Mushekwi suffered a knee injury in February, while playing for his Belgian club KV Oostende in Belgium.
The towering striker is spending the season on loan at the Belgian Pro League side after signing for them from South Africa Premiership side Mamelodi Sundowns.
The Belgian Pro League side is also home to Bafana Bafana’s former Orlando Pirates midfielder, Andile Jali.
The player’s manager Ralph Nkomo is happy with his recovery and is confident he could be available when the season starts.
KV Oostende are reported to be interested in signing him permanently following his impressive performance soon after signing for them before the latest injury kept him on the sidelines.
The former Caps United striker arrived in South Africa on Tuesday.
“Nyasha is here on holiday. He got an early holiday because he is injured. He is fine and is recovering. I am happy with his recovery. I am sure he will be available at the start of the season,” said Nkomo.
Although KV Oostende are angling to take him permanently, his club Mamelodi Sundowns are also reported to be preparing to have him back as they prepare for the new season.Advertisement