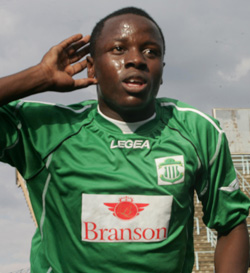 ZIMBABWE international striker Nyasha Mushekwi was on target in his debut match on Sunday as his KV Oostende came from behind to draw 1-1 with Zulte-Waregem in Belgium’s top league.
The former Mamelodi Sundowns striker played the full 90 minutes and scored the equaliser to claim a valuable point for his team.
Fellow pro Ovidy Karuru, who also plays for OH Leuven in Belgium, said on Facebook: “Mushekwi, one game one goal! I see him killing teams in Belgium. Well done countryman, the sky is the limit.”
His agent Ralph Nkomo said: “Immediately after the game, the president of KV Oostende called me to convey the news. As his agent, I’m relieved because it’s a good start to his career in Europe.
“They were playing against a team that is in the Champions League and it is good for him to make such an impact.”

Mushekwi’s team are 15th in the league, and anchoring the table is Mons, a team home to another Zimbabwean, Vusa Nyoni.
While the former Highlanders and AmaZulu midfielder has been enjoying some game time, the team has performed badly and this weekend they went down 0-2 to Standard Liege.
Nyoni was taken out in the 59th minute for Richard Soumar.
In the Czech Liga in Czech Republic, former AmaZulu strongman Costa Nhamoinesu’s Sparta Praha crashed visiting Pribram 4-0 to stay level on points with log leaders Viktoria Plzen but second due to an inferior goal difference.
In Denmark, former Motor Action forward Quincy Antipas’ Brondby side drew 0-0 with Rainders.
In South Africa, Tinashe Nengomasha, Thomas Sweswe, Kingstone Nkhata, Knowledge Musona, Benjani Mwaruwari and Willard Katsande are all in danger of seeing their sides crashing out of the lucrative MTN8 Cup following first leg losses over the weekend.

The trio of Nkhata, Musona and Katsande were part of the Kaizer Chiefs line-up that lost 0-1 to arch rivals Orlando Pirates while Sweswe, Mwaruwari and Nengomasha’s Bidvets Wits side were hammered 4-2 by Platinum Stars.Advertisement