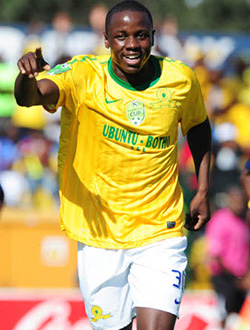 NYASHA Mushekwi no longer wants to extend his contract with South African premiership giants Mamelodi Sundowns following the club’s decision to leave him out of the squad for the current season, it has emerged.
The lanky striker spent the whole of last season on loan at Belgian club KV Oostende, and the possibility of him returning to the Pro League was dashed after he sustained a career-threatening injury toward the end of last season.
Now, according to a source within the Tshwane giants, Mushekwi has fully recovered, and he’s already looking forward to starting a new life somewhere else next year.
“At this stage, I have to admit that Nyasha will be lost to Sundowns,” the source told Goal. “He’s already assessing his options, and it looks like he’s definitely made up his mind about leaving the club,” the source said.
Sundowns reportedly offered Mushekwi a new contract despite the fact that he won’t feature in any of their official games this season, but the Zimbabwe international rejected it.
“The club was keen to extend his contract, but the player isn’t interested at all,” added the source.
The 27-year-old Mushekwi, who was once on the radar of Orlando Pirates, could well return to Belgium, with Cercle Bruge his next possible destination, according to his agent Ralph Nkomo.
However, at this stage, none of the teams interested in his services are able to approach the player, as he has not entered the last six months of his contract with Sundowns.