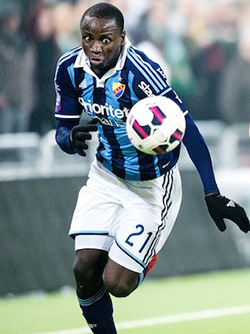 EGYPTIAN football giants Zamalek have reportedly tabled an annual salary of 6.2 million Swedish kronor about ($742,474) for Zimbabwean international striker Nyasha Mushekwi.
Mushekwi, on loan to Swedish club Djurgården from South Africa’s Mamelodi Sundowns, ended his spell in Europe on a high as he scored in his last game, Monday’s league derby against Hammarby.
The striker scored with a header about 12 minutes before full time to make it 2-all, helping his side rescue a point from the game.
Monday’s game ended his loan spell at Djurgården and he was expected to fly to South Africa the next day.
Despite scoring, Mushekwi was disappointed with the result.
“I think we deserved more,” he said.
“We worked so hard as a team that we should have had three points. But unfortunately we got a point, but at the same time we got a point, we could have lost.”
Regarding his future, the striker gave the Djurgården faithful some hope.
“I hope to come back, but we’ll see how it goes,” he said.
“I know the transfer window closes soon, we’ll see how it goes. This is my home away from home. The past six months have been spent in the best of my career.
“I cannot imagine to leave but unfortunately this is how the situation is.”
Reports suggest that Mushekwi’s parent club Sundowns are demanding R15 million (US$1.1m) for him, a sum Djurgården are understood to be unable to match.
Djurgården director Bosse Andersson however, said they had made a proposal to the South Africans.
He said he was confident the solution proposed to Sundowns is reasonable and would be accepted as long as no other club comes up with a bigger offer.
“I am convinced that Nyasha has not played his final game in Djurgården,” Anderson said ahead of Monday’s game.
“The only question is whether it is in 2015. I am also more hopeful now than before that Nyasha returns in the autumn.”
Meanwhile, Egyptian side Zamalek also want the striker and have reportedly tabled a tempting salary.
Mushekwi has however, previously said he prefers to stay in Europe and it remains to be seen whether he will now be tempted by the offer from Zamalek.
There is also interest from Serbia’s Red Star and a pair of Chinese clubs.
The former Caps United striker has scored 11 goals for his club and is the third top goal scorer in the Swedish league.Advertisement

Warriors coach Kalisto Pasuwa is expected to include him in his squad to face Guinea in a 2017 African Cup of Nations qualifier in Harare on September 6.
The forward missed the trip to Malawi where the Warriors overcame a battling Malawi 2-1 in the first match of the campaign.