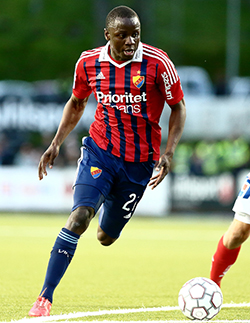 ZIMBABWE hitman Nyasha Mushekwi continues to set the Allsvenskan league alight after scoring his third brace of the campaign in Djurgardens’ 3-2 victory over Halmstad on Monday.
“Today was a difficult match,” he said after the game.
“I’m used to playing on artificial turf, and today it was the grass difficult. But three points is what we came for, and three points is what we got.
“So I thank God for everything. We worked hard, the first half was difficult, but in others we pressed on and got the victory.”
He added: “My main goal was to score goals, so I’m happy that it happened so far in the season.
“I hope I can continue to score goals during the season. Now we are at the top, the other matches we (will see) the week goes.”
The 27 year old could have scored a hatrick after he nodded in the first half a ball that looked to be over the line before goalkeeper Lukic hit it out onto the field again and defender Emil Bergstrom pressed into the top corner.
“I think it crossed the line before. I do not know how it gets, it does not matter. It was three points we came for, and it was three points we got, he says.
“I’m enjoying right now. I think it’s been really fun,” said Mushekwi.

Djurgardens went into the lead 14 minutes into the match through Bergstrom with the home team equalizing 14 minutes later courtesy of Junes Barny.
But the Zimbabwean striker on loan from South African Premiership side Mamelodi Sundowns, doubled his side’s lead on 75 minutes.
With the leadership changing hands several times England international James Keen levelled matters at the stroke of full time.
But not to be outdone, the Zimbabwean ended the tie as a contest in referee’s optional time.
The victory lifted Djurgardens from fourth to the top of the league table with 19 points from nine matches.
The Swedish club though have played one more game than the rest of the teams. IFK Goteborg are on 19th position from eight matches, while Malmo FF are third on 18 points from the same number of matches.
Last week Mushekwi scored another brace in his team’s 3-2 win over Atvidaberg, his second since joining the club at the start of the season.
His first two goals in one game came in Djurgardens’ 3-1 win over Falkenberg which saw him sharing the top goal scorers’ chart with Norway striker Jo Inge Berget who plays for Malmo.Advertisement

The Zimbabwean international now leads the goal scorer’s chart with nine goals in nine matches of the campaign.