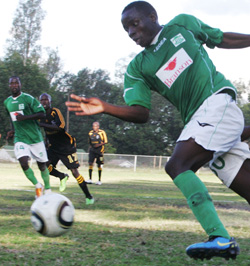 SUNDOWNS’ Nyasha Mushekwi, who is currently enjoying a loan spell at Belgian outfit KV Oostende, has been ruled out of action for 16 weeks due to a knee injury.
The 26-year-old sustained the injury during Oostende’s 1-1 draw against KV Mechelen on Saturday.
“Scans showed that the cruciate ligaments are not torn, but there’s a tear of the ligament that stabilizes the knee,” KV Oostende said on their official website.
“This means the Zimbabwean attacker will surely be out for the next four months.”
Mushekwi has been vying for a permanent deal with the Belgian club, with his loan spell coming to at the end of the current season, but his injury has led to uncertainty regarding his chances of earning a contract.
Orlando Pirates were said to be on the verge of signing the Zimbabwe international before his move to Oostende and have stated that they are keen for the striker to join the Soweto-based outfit.Advertisement