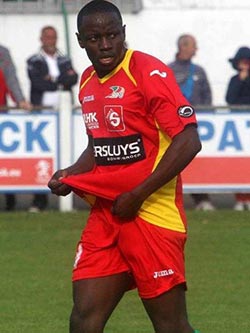 NYASHA Mushekwi’s future with KV Oostende will hinge on the outcome of talks between the Belgian club and Mamelodi Sundowns.
While Mushekwi is due to complete his loan spell with Oostende at the end of June, a knee injury has put him out of action for the rest of the season.
Mushekwi’s contract with Sundowns also runs out at the end of June and the Chloorkop-based side are now in talks with Oostende regarding an extension to his loan – or even a permanent move to the Pro League team.
The player’s agent Ralph Nkomo told KickOff.com that the striker’s knee injury is unlikely to affect the talks.
“Nyasha will not be playing again this season but this has not affected the discussions between the two teams. He has had an operation on his knee so he cannot play.
“It is really up to Sundowns and the club [Oostende] to agree on whether the player will extend his stay in Belgium or will return to Sundowns,” Nkomo said.
“We will have to wait for the outcome of the talks,” he adds.
During the January transfer window, Orlando Pirates made a swoop for the Zimbabwe international.
However, talks between Bucs and the Brazilians collapsed as Sundowns preferred the player to continue his spell in Europe.Advertisement