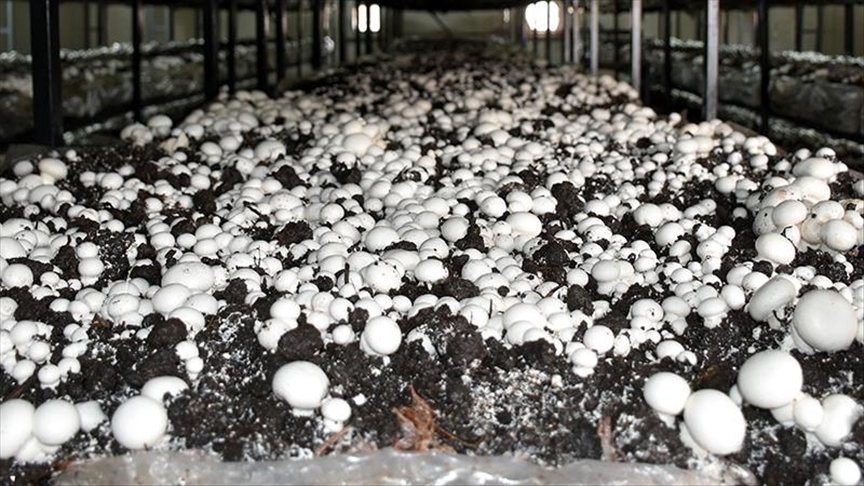 Mushroom farming is gaining ground in urban Zimbabwe, with more and more people growing the delicacy in their backyard to earn extra bucks.

Linda Choto, 40, earns up to $400 a week from her mushroom farming business in Harare, capital of the Southern African country.

Choto is among hundreds of city dwellers in Zimbabwe who have of late switched to mushroom farming, turning the wild vegetable into gold. “I make between $200 to $400 a week through my mushroom business depending on the type of mushroom available,” Choto told Anadolu Agency.

With Zimbabwe’s economy in doldrums, many like Choto have become the suppliers of the vegetarian “ground meat,” which has proven popular for many jobless city dwellers in Harare like Givemore Nhari.

“It’s the mushroom that makes us taste meat because the mushroom is affordable, unlike the real meat at the butcher which I last ate on Christmas,” Nhari told Anadolu Agency.

So emerging mushroom farmers in Zimbabwe’s cities help supply the affordable nutritional needs of the majority like Nhari.

Mushroom farming is gaining popularity at a time when the coronavirus pandemic in Zimbabwe has left many people jobless.

Like many others, Blessing Munautsi, 61, a resident of Westgate, a low-density suburb in the capital Harare, started mushroom farming after losing her job in 2016 at an industrial firm.

Like Choto, Munautsi is making rich pickings from growing mushrooms.

After she was fired from her job, Munautsi said she turned to a friend well versed with growing mushrooms, learning the ropes before moving into the business in the backyard of her rented house.

Choto, who already has an 8-5 p.m. job, started the business in 2017, growing oyster mushrooms. She has already made huge strides, turning herself into a mass grower of the delicacy.

She has captured a huge market for her product, as many like Nhari turn to mushrooms as the only affordable delicacy across Zimbabwe’s cities.

“The business is doing better than I expected, as not everyone can afford meat as a relish in this COVID-19 era, and mushrooms are an affordable alternative, coupled with their nutritional benefits,” Choto said.

“I enjoy this form of smart farming, which requires less time, effort, and space. I’ve also been able to make a reasonable second source of income by growing mushrooms.”

But the city farming also carries headaches for growers, because buyers of the delicacy often underprice their product.

In fact, said Choto, “prices in Zimbabwe are not favorable and are determined by the buyer, thereby undermining the farmer.”

“Over the years, as growers, we have tried to set a market price, but the buyers have not been keen to engage with us and understand the process of growing,” Choto said.

Government agricultural officers, like David Charwara, based in Chinhoyi, a town 120 kilometers (74 miles) west of Harare, are skeptical of urban mushroom farming.

“Mushroom is a peculiar crop with distinct growing conditions. Most urban dwellers will be lucky to have a taste of it, as the natural conditions for growing mushroom are a rarity in our towns,” Charwara told Anadolu Agency.

For Charwara, even as many mushroom growers like Choto and Munautsi soldier on with their venture, they face stiff competition from the mushrooms shooting up in the wilderness.

“The number of mushrooms which grows in our bushes each year can’t be quantified,” said Charwara.

Despite all odds, 40-year-old Laura Muzanenhamo in Ruwa, a sprawling suburb in Goromonzi, a town about 35 km (21 mi.) east of Harare, has opted for mushroom farming. She makes about $50 to $70 a week from mushroom sales.

Initially, Muzanenhamo said she was not motivated by a desire to make money “But later I started farming on a commercial scale after realizing its business potential,” she told Anadolu Agency.

But coronavirus has brought challenges that have not spared mushroom farming.

“Mushroom farming as a business in the midst of COVID-19 is quite challenging. Some people don’t want visitors in their homes, posing a challenge for me to deliver the mushroom, and some don’t come to my place to buy the mushrooms because people are afraid to move around. Now we’re in a lockdown. It’s a big challenge,” said Muzanenhamo.

Nevertheless, many like Muzanenhamo have something to smile about.

“A lot has changed for me. I have some money all the time now and my family has this nutritional meal whenever they feel like it,” Muzanenhamo said.

For agricultural officers like Conrad Gogo, based in Marondera, a town in Mashonaland East province, east of the country’s capital Harare, it is not only the love of money that pushed city dwellers to mushroom farming.

“People are turning to organic foods for health reasons. Meat is becoming expensive. Mushrooms don’t require large tracts of land. They’re not labor intensive either. And in towns, a market is available,” Gogo told Anadolu Agency.

Even the elite class dwelling in posh suburbs of the capital Harare has scrambled to join the venture.

Irene Mkondo, 66, a retired college lecturer living in Glen Lorne, an affluent northern suburb of Harare, said: “When I retired, I decided to venture into growing oyster mushrooms because I had the time and needed to make money while I was at home.”

She added: “Mushrooms are a high-value crop sought after by big supermarkets, restaurants, and hotels. So this becomes a motivation on its own for urban dwellers to venture into its farming. Mushroom farming needs a small area with a well-built 10×5-meter darkroom, which is easy and cheap to make.”

This article was first published on Anadolu Agency.