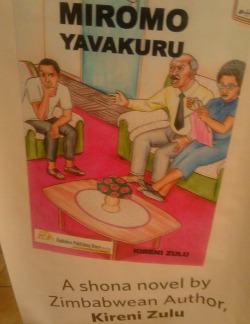 SELF-PROCLAIMED King of Marabi music solo guitarist Kireni Zulu has published his first Shona novel after almost three decades of trying.
Titled Miromo Yavakuru and published by Zimbabwe Publishing House (ZPH), the 102 page novel was launched Wednesday night.
Zulu left guests in stitches when he chronicled his authorship journey right from 1990, the first time he attempted to have his book published.
He said his first manuscript was rejected because it was meaningless.
“After I mastered playing the guitar and writing songs, I then decided to venture into novel writing as I believed that I had so much to tell the local people. I took my first manuscript to Literature Bureau (LB) but it went straight into the bin because it was just one sentence from page one right up to the end,” said Zulu.
“No full stop, no coma and no paragraphs, but I had the idea of my story that I wanted to tell and the title of that book was called Mandigona.”
Zulu told guests that he still had a letter written to him by the then Editor Matanhire, who wrote to him in 1992 rejecting his works because they were meaningless and had no business value.
“He advised me to try other publishing houses.”
“But thanks to advice I got from the current National Arts Council of Zimbabwe (NACZ) director Elvas Mari, who taught me how to write. Mari was then an Editor with the Literature Bureau.”
Zulu said Mari gave him a pamphlet to read titled A New History to The New Author which had notes on how to write a book.
“But then I was so frustrated and I shelved the idea of writing a book because I had discovered that it was not that easy. I pursued my musical career and it brought food to my table,” he said.
Zulu released his first single in 1991 but after a struggle as he was also rejected by recording companies because of the genre of his music-Marabi.
Miromo Yavakuru is about two love teenagers from rural Mhondoro could not pursue their secondary school education because the girl got pregnant before they sat for their final O’ Level examinations.
The boy, Jorum, later left their rural home to look for employment in the city but to no avail and ended up in the City of Kings Bulawayo as a notorious street robber.
Kireni Zuku was born in Zvishavane mining town in a family of eleven children.Advertisement

He did his primary education at Mabika Primary School in the same town and later went to Rimuka High School in Kadoma for secondary education.
He was to spend most of his time at Martin Square Farm which is well known for producing mangoes; there he learnt how to play the guitar with the help from his brothers