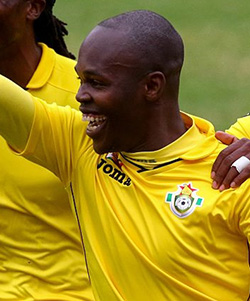 WARRIORS captain Knowledge Musona scored his first hat-trick for the national side as Zimbabwe thumped Liberia 3-0 in the opening 2019 African Cup of Nations qualifier against at the National Sports Stadium on Sunday.
The KV Oostende forward was given the arm-band to lead the Warriors this week, replacing Willard Katsande who has retired from international football; and Liberia could do little to resist his fire power.
With the hat trick, Musona has now scored a total of 19 goals for the Warriors.
After a rather slow start, the new-look Warriors, featuring notable new faces including Thabani Kamusoko who played a blinder in the heart of the midfield alongside the ever-flourishing Netherlands based Marvelous Nakamba, went into the lead on 24 minutes, Musona beating an offside trap to drill the ball home with a low shot.
The Warriors skipper doubled the lead in the second half on 49 minutes, profiting from a cross from the right by Mahachi before netting the third on 63 minutes from a pass by Partson Jaure.
Musona had earlier missed an opportunity after he was set up by Nakamba on 10 minutes; his effort seemingly handled by a Liberian defender but his appeal for a penalty was turned away by the referee.
Liberia’s Marcus Macauley also came close on the quarter hour, but he directed his effort wide.
The Warriors could however, have killed the game off in the first half, but Tendai Ndoro, was guilty of missing several opportunities.
On 31 minutes, Ndoro who has fallen down the perking order at his South African club Orlando Pirates where he is struggling for goals, had his effort saved by the keeper from a cut in by Musona.
Moments later Ndoro also missed a headed opportunity from a corner kick.
It was Kamusoko, instead, who came close but his stunning free kick hit the underside of the cross bar on 41 minutes.
However, Teenage Hadebe, who partnered Jaure at the heart of the defence nearly committed treason, miscuing his effort in a desperate bid to clear the ball from danger. Fortunately for Zimbabwe, Russia-based Sylvanus Nimely was slow in reaction for the visitors.
Liberia coach James Debbar made a double substitution on 57 minutes in search of a comeback. But it was Musona instead who could have made it 4-0 as his curling shot on 75 minutes crashed against the cross bar.Advertisement