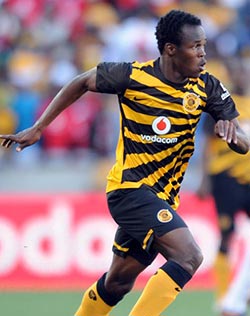 THREE goals from Knowledge Musona gave Kaizer Chiefs an emphatic 3-0 first round, second leg CAF Champions League victory over Liga Muculmuna in Maputo on Saturday.
Amakhosi progress to the next round of the competition on a 7-0 aggregate score-line.
Zimbabwean striker Musona’s hat-trick came in the opening half hour of the game and it put the visitors from South Africa firmly in the driving seat.
Chiefs began well and came close through Siyabonga Nkosi after he was set up by Matthew Rusike and Musona. But Nkosi’s effort was saved by Milagre.
Then Rusike had a chance of his own after being supplied by Nkosi, but his attempted shot hit the upright. Almost immediately, Chiefs were in lead when Musona found the back of the net.
Musona tucked away a rebound after Rusike’s initial attempt had hit the upright with the goalkeeper beaten.
After 27 minutes Chiefs went two nil ahead when Musona netted another strike and he had his hat-trick just after the half-hour mark when he scored a penalty.
When the second half started it was evident that Muculmuna had more purpose and wanted to fight back but Chiefs remained tight in their defensive structure.
In the 65th minute substitute Kingston Nkhatha had a chance on goal from a set piece, but his effort sailed over the bar.
And in the 76th minute Chiefs fullback Siboniso Gaxa tried to place a shot past Milagre but the Muculmana goalkeeper made a strong save.
Chiefs goalkeeper Reyaad Pieterse was called into action in the dying minutes of the games as he made a good save to deny Radicle.
Chiefs will now clash with either Zimbabwe champions Dynamos or DRC side AS Vita in the Caf Champions League second round.Advertisement