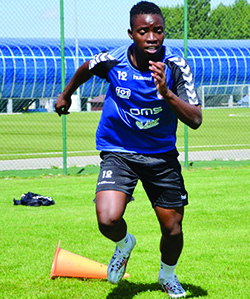 FORMER FC Platinum duo Walter Musona and Wisdom Mutasa are back in the country after deciding to cancel their contracts at FK Seneca of Slovakia, a club they had signed for in the August transfer window.
The Under 23 duo went for trials in August and made the grade under then coach Eduard Pagac.
They came back home to wait get their papers in order and when they returned to Slovakia, Pagac was fired after just two days and a new coach was appointed.
Musona claims the new coach, Adrej Stellar, completely ignored them.
“He conducted training in a language that we did not understand and we were not involved in most of the programmes so we thought it was better for us to return home,” Musona said.
The duo was at Mandava to watch their former side Platinum beat Whawha 3-0 to remain in second place in the Castle Lager Premiership title race.
However, they will not be able to play again this season as they have to wait for reverse international clearances in January if the Slovak club, Seneca, decides there was ‘just cause’ in the termination of their contracts.
Musona and Mutasa’s rights are held by top Harare academy Aces Youth Academy and director Nigel Munyati is now in negotiations with Seneca for the duo’s official release so that they resume their careers back home in the new year.
Zimbabwean players have not fared any better in Europe, save for Knowledge Musona, Nyasha Mushekwi and Costa Nhamoinesu in the Czech Republic with most preferring South Africa as their destination to further their careers.
But some have also been flops in the Absa Premiership, notably Dynamos striker Rodreck Mutuma, who had signed a three year contract at Bloemfontein Celtic that was eventually cancelled for underperformance.
His teammate at the Zimbabwe champions, Ronald Chitiyo, even failed to land a deal at National First Division One side Royal Eagles.
Again former Highlanders utility player Milton Ncube is struggling for game time at Ajax Cape Town in the Absa Premiership while his former teammate at Bosso, Kuda Mahachi, has been shipped to Golden Arrows after underperforming at Mamelodi Sundowns.
Notable players doing well in SA are Kaizer Chiefs hard-man and Warriors skipper Willard Katsande, Chippa United defender Eric Chipeta and the Sundowns’ duo of Khama Billiat and Cuthbert Malajila.   Advertisement