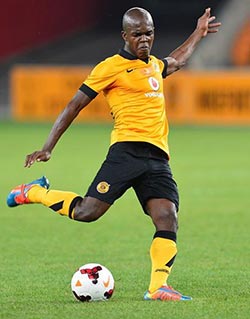 KAIZER Chiefs striker, Knowledge Musona, has been named the CAF Champions League Player of the Week on FIFA’s official website.
The 23-year-old scored his 13th goal in all competitions this season for Chiefs when they beat Mozambican side, Liga Muculmana, 3-0 in Maputo this weekend, securing their place in the second round of the tournament.
The Zimbabwean has hit a rich vein of form in recent weeks and will be happy to be finding the back of the net again on a regular basis.
The forward scored four goals against Muculmana over the two legs, which ended 7-0 on aggregate, with his hat-trick on Saturday sealing their qualification.
Of Musona, FIFA’s website said:
“Although only 23, Knowledge Musona can already look back at two seasons spent in the German Bundesliga before returning to Kaizer Chiefs on loan from Hoffenheim.
“With the form displayed in Mozambique during Chiefs’ second match, the striker could well be back in Europe next season as he scored a first-half hat-trick against Liga Muculmana before being granted a well-earned rest in the second half by coach Stuart Baxter.
“Musona’s goals gave the Amakhosi a 7-0 aggregate victory and sent the home side to their first-ever home defeat in continental competitions.”
Chiefs now face AS Vita from the DRC over two legs as they attempt to make it through to the group stages of the competition.

Meanwhile former Kaizer Chiefs striker Pollen Ndlanya said Musona could play a key role in the side push for the treble this season.
“I think Stuart Baxter (Chiefs coach) has a good striker in Musona,” Ndlanya said.
“That boy is in actual fact a predator. He has not yet reached his true potential I think. He is getting there and he is going to give a lot of defenders problems.”
Away from his continental exploits, Musona has netted six goals in the PSL as Chiefs surge forward to successfully defend the Absa Premiership title.
Ndlanya said Chiefs should by Musona back outright if they are to be a force in the domestic game for the next two seasons or so.
“I think the management should consider buying him outright,” he said.
This week, Chiefs shift their focus back to the league as they prepare for their match against Platinum Stars in midweek and the Soweto derby against Orlando Pirates on Saturday.Advertisement

A fit and on-form Musona would be key to their pursuit of maximum points.