FORMER Warriors skipper, Knowledge Musona has been voted the Saudi Pro League’s Player of the Week after a match-winning performance for his club Al Tai Thursday.

Musona scored a memorable hat-trick in his team’s 3-0 win over Al-Khaleej as he continues to impress since joining the Saudi Arabian topflight side from Belgian topflight league Anderlecht, last season.

After his illustrious display, Musona was given the highest rating of 9, 4 out of 10 in the league’s Team of the Week ultimately earning the Player of the Week honours. 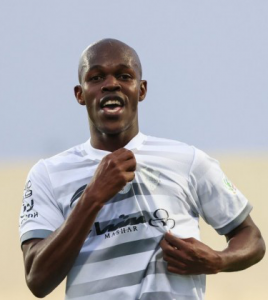 The 32-year-old former Zimbabwe international, who wore the captain’s armband during the match started the match as a right winger in a great sign of the confidence his club has in his abilities despite his age.

Musona certainly lived up to his billing as he broke the deadlock with a well-taken penalty in the 18th minute.

Musona got his second goal of the day eight minutes into the second half. He notched home from a rebound after the keeper parried the ball into his path.

He completed his hat trick on the hour mark after starting and finishing off a brilliant move on the right a clinical fight-footed shot from inside the box which gave the goalkeeper no chance.

Musona has started in all six games played so far for Al Tai to fourth position on the log with 12 points from just matches, six behind log leaders Al-Shabab.