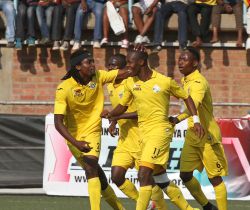 KNOWLEDGE Musona scored his first goal of the South African season Saturday to help Kaizer Chiefs defeat Maritzburg United 2-0 in the Premiership.
Musona is on loan from German Bundesliga club Hoffenheim and fired blanks in three league and two cup games before facing modest Maritzburg at Soccer City stadium.
But after being thwarted by the speed and bravery of United goalkeeper Shu-aib Walters early on, the Zimbabwean striker ended his goal drought on 37 minutes.
A deflected Siphiwe Tshabalala drive cannoned back off the base of the post and the inrushing Musona netted with a fierce shot that flew in off the underside of the crossbar.
The goal set defending champions Chiefs on the way to a comfortable win after a draw with Moroka Swallows and a loss to SuperSport United in their previous two league games.
It also completed a productive week for Musona, who scored the first goal for Zimbabwe in a 2-1 friendly triumph over South Africa last Tuesday in another Soweto stadium.
The 23-year-old, who finished as leading Premiership scorer in a previous spell at Chiefs, was withdrawn in the second half with a stomach muscle injury.
Chiefs clinched maximum points on 75 minutes when a Reneilwe Letsholonyane shot rebounded off the post and substitute George Lebese made no mistake from close range.
A Maritzburg side coached by German Ernst Middendorp offered little going forward with a narrowly off-target header from midfielder Rheece Evans the closest they came to scoring.
Chiefs are fifth after four outings with seven points – two less than pacesetters SuperSport, who were away to promoted Mpumalanga Black Aces Sunday.Advertisement