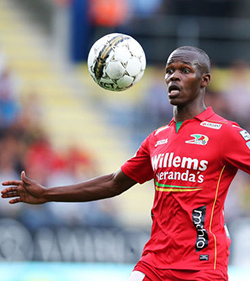 ZIMBABWE international forward Knowledge Musona continued with his fine form after scoring his fifth goal of the campaign at the weekend in a 3-0 win over OH Leuven.
The victory helped his side Oostende to move to the summit of the league with 31 points from 15 matches, one point more than second placed Gent who lost 1-3 to Sporting Charleroi.
Should KV Oostende continue with this form and secure the championship, it would give Musona the opportunity to rub shoulders with the best in the prestigious Champions League.
With giants Anderlect settling for third position on the league table with 29 points after suffering a 0-1 defeat to Standard Liege, there are strong indications Musona’s side Oostende could lift the championship which would give him the platform to play on a grander occasion.
Club Brugge who beat Westerlo 2-0 are in fourth position with 28 points.
However, it is Musona’s form which is good news for Warriors coach, Kalisto Pasuwa, who is bidding to qualify for the 2017 African Cup of Nations finals in Gabon.
Musona scored a beautiful leveller in the 1-1 draw against Guinea at Rufaro to help Zimbabwe remain joint top goal scorer in Group L with Swaziland.Advertisement