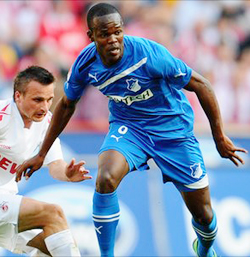 ZIMBABWE star striker Knowledge Musona has revealed he will return to German club 1899 Hoffenheim at the of his loan spell with South African champions Kaizer Chiefs in July.
Musona joined Chiefs at the beginning of the current season, having failed to make an impact at Hoffeinheim, who had also initially loaned him to fellow Bundesliga side FC Augsburg.
The 23-year-old Warriors talisman has regained his old form during his second spell with AmaKhosi, and the Soweto giants are believed to have made overtures to sign him permanently.
But in an interview with this week’s edition of the Sunday Times, Musona, who has scored six goals for Chiefs in their last six league matches, said he was longing to have another shot at European football and believes he can make an impression this time around.
“My aim has always been to come to SA to get my confidence back with the help of coach Stuart Baxter, and go back to Europe,” Musona told the publication.
Musona was signed by Hoffeinheim in 2011 before returning to the club which elevated him to cult hero status following two frustrating years in the German top-flight.
The Aces Youth Academy graduate, who also scored an extra time winner for Chiefs against Black Leopards last Sunday in the last 32 of the Nedbank Cup, reckons he is now ripe to set the stage alight in Europe.
“I think I have grown and have had the experience of playing in Germany, although it was tough. My club is keeping an eye on me and I am looking forward to going back.
“In my first year in Germany, Holger Stanislawski wanted to introduce me slowly, but got fired by Hoffenheim halfway through the season.
“Things fell apart for me. His replacement had no idea who I was and who signed me. I was then loaned out to Augsburg, and it was much the same story. The coach played me for at least 10 minutes of every match in the first half of the season, but then also fired got fired.
“The new coach didn’t give me a chance. I’ve been on the same page with (Kaizer Chiefs coach Stuart) Baxter and I will take back the patience and advice.”
Meanwhile, Baxter has also confirmed Chiefs’ interest in making Musona’s loan spell permanent.
He said: “It was a slow start for him here, nut everybody knew he was undoubtedly a good player. But he hadn’t done any work with me and had to first understand the way we play. That takes about eight games. It’s taken Knowledge the time it should take to adapt and he is firing now.Advertisement

“He understands what we want. He could leave, but I hope I haven’t brought him back to a level where other people think he is attractive again. We will try to do everything we can to keep him at the club. My mother used to say ‘never borrow sorrow from tomorrow’, so we’II get on with it.”
Musona’s move back to South Africa was met with some disapproval at home, with critics saying the Norton-born ace had taken a step back in his promising career.