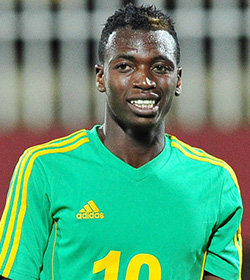 NORMAN Mapeza’s charges started the year as hot favourites to win the title, but after five defeats in nine matches, they have a fight on their hands just to make the top four
FC Platinum ace Walter Musona is convinced that his side can replicate the form they showed in the second half of last season if they remain focused in their upcoming matches.
The skilful winger has been the club’s standout performer with five league goals in eight matches, but his fine form has contrasted sharply with the team’s tumbling fortunes.
On Sunday, Mapeza has a daunting task against rampaging log leaders Triangle, who have scored 23 goals in nine games and would be motivated to prove their mettle against one of the league’s glamour clubs.
Zimbabwe youth international Musona said: “Things have been difficult for us and we have to start winning consistently now.
“If we can keep our heads high and remain focussed I am sure we can produce the results just as we did in the second half of last season.
“We have lost some games yes, but even teams like Triangle might also start dropping points. So it’s still too early to say whether we are still in the title race or not.
“That we can only tell when the season comes to an end.”
The picture is however, looking gloomy for the platinum miners at this stage, as their 10 points tally means they are closer to basement dwellers Dongo Sawmills than pacesetters Triangle, who are on 20.
Platinum’s defence has been among the five most porous in the league after shipping 11 goals, and Mapeza’s side will need to be defensively sound against the free-scoring ‘Sugar Sugar Boys’ on Sunday.
Gift Bello is back in favour after a stint on the sidelines and he’s likely to be partnered with Kelvin Moyo in the heart of defence, but it is the anchorman’s position where Mapeza has to decide on his most reliable choice between Thabani Kamusoka, Wellington Kamudyariwa and William Mhango.