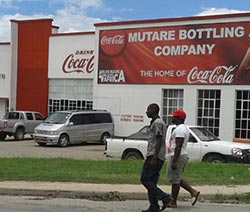 MUTARE Bottling Company has commissioned a new $17 million automated bottling plant that would boost its production by as much as 400 percent, its first major investment since dollarisation in 2009.
The bottler, which holds the Coca-Cola franchise for the Manicaland region, is 63 percent owned by telecommunications group, Econet Wireless Zimbabwe.
Managing director Allen Lang told The Source that the new plant has capacity to produce 30,000 bottles per hour, up from between 6,000 to 10 000 bottles per day.
The new plant has also increased capacity utilisation to ‘optimum’ levels from 35 percent before the commissioning, which was done last week.
Lang said the new plant means the company will move workers from its production department to distribution.
“The new line is more automated than the old lines that are 30 years old that have been replaced. This will result in some production staff being moved from production into distribution,” he said, adding that the company will not retrench.
MBC currently has a total of 323 workers, including 257 full-time employees.
“We will retain all our employees, including contract workers and will even add more due to the increased need in distribution. We have acquired more delivery vehicles and 160 vending units,” Lang said.Advertisement