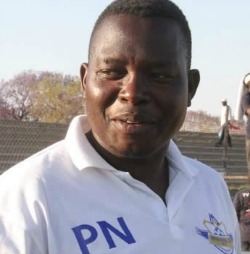 BULAWAYO City edged Mutare City 1-0 in a Castle Lager Premier Soccer league match at Sakubva Stadium on Sunday.
It was Mutare City’s seventh defeat in nine starts and yesterday’s match was marred by poor display as they failed to create meaningful chances.
The visitors showed a lot of verve right from kick off and it was a matter of when rather than if they would score.
It didn’t take time before Mkhululi Moyo netted from a rebound on 12 minutes sending their few cheering fans, who had travelled with the team, into delirium.
The home team was forced to make a substitution after Emmanuel Meleka was injured and had to be replaced by Kudakwashe Gurure.
In the 41st minute, goalkeeper Liberty Chirava who proved his heroics between the sticks was forced to make a brilliant save following a free-kick at the edge of the box.
Mutare, however, started brightly in the second half and on 52 minutes, Sam Msimbu was denied by a super save from goalkeeper Chirava.
The home team then pulled off Caleb Masocha for Steven Sibanda on 57 minutes which, however, failed to pay dividends
But Sibanda was guilty of a miss on 87 minutes after winning possession from close range.
Bulawayo head coach Philani ‘’Beefy’’Ncube said they were tactically superior than their counterparts.
“It was a game of two halves and we were tactically superior , I don’t think l will never lose again at Sakubva after winning today (Sunday) we know it was going to come with a win but we got it and l am happy,’’ he said.
His counterpart Taku Shariwa said they conceded a silly goal but believes they will bounce back in their upcoming fixtures.
“We conceded a silly goal, we failed to clear a throw in and we were heavily punished, but we are hopeful to comeback in our next fixtures,’’ he said.Advertisement