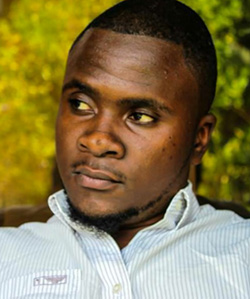 MUTARE: Local filmmaker Thabiso Daudi Phiri excelled at the recent Zimbabwe International Film Festival (ZIFF) after his film A tale of Old Lovers came third in this year’s Hi5 Non-Dialogue Short Film competition held in Harare.
For his efforts, Phiri, 25, walked away with $200 equipment hire voucher from Media Matrix. The competition was bankrolled by the Germany Embassy to promote film industry in the country.
Phiri rose to prominence after he scooped an Inxusa Theatre Award for best playwright with his play Generation of Bondage in 2014.
Phiri, who is currently a screenwriter for popular ZTV soap ‘Wenera’, said he was happy that he managed to shrug the stiff competition from over 30 filmmakers who entered the competition.
“I feel great to be recognised on such a platform,” he said.
“This means I am moving in the right direction. It actually came as a surprise to me because I never expected this play to put me on limelight.”
A Tale of Old Lovers features sculptors who become subjects through which the story is derived from.
According to Phiri, true love is noticed by one’s ability to love someone regardless of their flaws, adding that all relationships have similar trajectories despite their duration.
The film was produced by Red Carpet TV and FAME Magazine with the help of Samantha Tariro Chitapi, Blessing Chigwenhembe and Talent Silas.
He said he produced the film on a zero budget and attributed this to the current economic meltdown in the country.
Phiri said the economic crunch was adversely impacting the industry.

“It’s hard to survive and make ends meet, let alone find resources to properly finance a production. At the same time this industry is full of people who monopolise everything from resources to opportunities.
“Working for someone is terrible in this environment because they will just enslave you and they do not appreciate your efforts.
“I honestly find it hard to single out one policy maker who is out there to better the industry they are all conniving to pursue and satisfy their selfish ends.”Advertisement