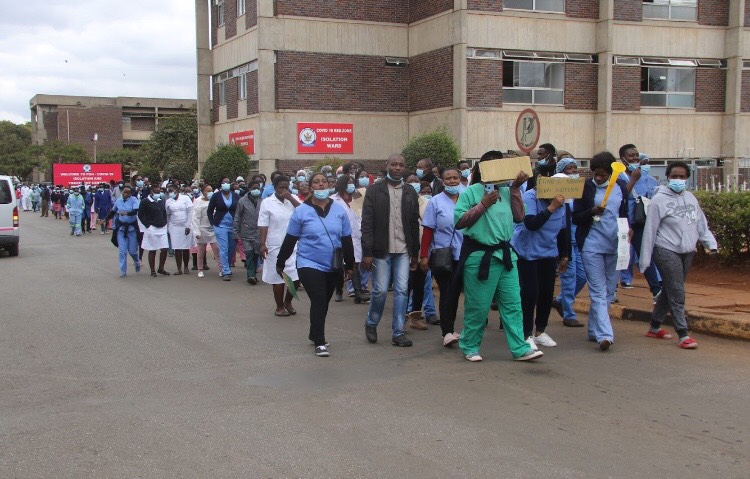 MUTARE: At least 35 striking nurses and other health workers at the Victoria Chitepo Hospital (formerly Mutare Provincial Hospital) were last Friday arrested for staging a demonstration against the recently introduced US$75 Covid-19 allowance and 50% salary increment, which they described as a mockery.

They were released after being detained for hours without any charge.

A visit at the hospital Saturday showed morale among the health workers was at its lowest as minimal service was being served to patients.

Patients waiting for treatment complained of poor service and confirmed the nurses were on go-slow. They pleaded with the government to resolve the crisis to save lives.

“All is not well here. We came here in the morning and we are yet to be attended to. We are told nurses are angry that their colleagues were arrested by police for protesting against poor working conditions and low remuneration,” one patient Richard Bwawo from Doradombo told NewZimbabwe.com.

He was accompanying his daughter for a regular checkup.

“We feel the government has an obligation to remunerate its workers. I feel the health workers have a genuine reason to go on strike because they have families to feed,” he said.

Sources at the hospital said the service particularly in the wards was the most affected as most nurses had downed their tools demanding better wages.

“Only a skeletal staff is available,” the source said.

Nurses who spoke to this paper said they were going to withdraw their services until their demands were met.

“It`s a mockery to say we will receive US$75 in a Nostro account for the next three months but we won’t be able to withdraw it. It`s not about groceries but saving something for our children. Do we work for food only?” one nurse who declined to be named said.

Another blasted the police arresting them for exercising their constitutional right in staging a demonstration.

“This was a peaceful demonstration to alert authorities that we are being chocked by their policies. We can`t continue working in such an environment. We can’t afford transport to work, food for our families and our future is bleak because we can`t even upgrade ourselves.”

The disgruntled health personnel said there was not enough protective clothing at the hospital and the government was not taking adequate steps to address their grievances and exposing them to the Covid-19 virus.

The protest follows similar protests at Parirenyatwa Hospital in Harare and Mpilo in Bulawayo.