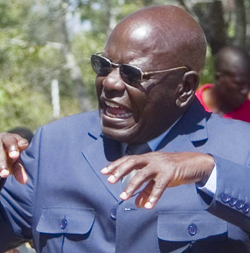 This is part of a revealing interview given to the Herald by war veteran and Deputy Foreign Affairs Minister Christopher Mutsvangwa attacking Presidential Affairs Minister Didymus Mutasa as the faction wars in Zanu PF escalate.
QUESTION: CDE Mutsvangwa we talk at a time of reports of serious infighting in Zanu-PF manifest in factions battling to succeed President Mugabe, what is your assessment of the state of the party?
Mutsvangwa:  The challenge that is befalling the party is that an ambitious coterie of political chancers that has also recruited lumpen elements  with criminal intent are pursuing  a fascist agenda as they employ Nazist tactics to try to wrestle power and then proceed to resurrect a post-Rhodesian political agenda. The coterie is totally opposed to the revolutionary history of the party whose regalia and banners they are so much want to flaunt.
The sad and inescapable reality is they harbour the reckless aberration that they can displace or bypass those that were engaged in the most critical 1973-1980 period of the national liberation struggle. They dream of a vault to high office where they will ensconce themselves  to corrupt influence as a prelude to the restoration of a post-colonial Rhodesian order. They have a craving to undo all that the heroic struggle delivered to the people of Zimbabwe. From within the belly of the Party, they think they can do better where Tsvangirai’s MDC floundered on July 31, 2013.
These are putchist crankpots with no appreciation of statecraft. The only political card they are hanging on to is their coalescence around a pretender called Didymus Mutasa.  Under the guise of banal revolutionary slogans and the trumpeting of Nicodemus allegiance to His Excellency President Mugabe, he toys with an ignorant aspiration to rule Zimbabwe. His roadmap to power goes through a self-styled role as kingmaker to new party leadership of his own fashion. He would hope to achieve this goal by sidelining H.E. President Robert Mugabe, the elected leader of the Republic.
Totally oblivious of his incapacity, Mutasa has been busy creating all sorts of office posts in the party and Government and according himself political titles like political guru of Manicaland Province. With no rule book he discards the party constitution and makes arbitrary decisions in the name of the President of the Republic then looks up to an un-elected Vice President Mujuru for defence and succour.Advertisement

Gangster types have gathered under his umbrella to pursue a political agenda that reeks of Selous Scout tendencies of the yester epoch of the national liberation struggle.
What is remarkable is that all these putchist chancers who crave power so recklessly, never bothered to partake in that heroic national endeavour when the times so demanded. Others simply chickened out. Even more telling is the fact they cluster around Mutasa and his cohorts, leaders who never had anything do with the critical 1973-80 period of the armed struggle.
The only legitimacy they accord themselves is the hazy clamour for the political ascendancy of Vice President Mujuru to the top national post. Why they want to foist her on Zimbabwe outside of the circle of her other many wartime comrades and without bringing them into that exercise, only the putchist elements and perhaps herself can explain. It is noteworthy that Mutasa has a long and notorious record of manipulating party ambition to his schemes of king-making.
His first victim was Edgar Tekere, who was misled to form the ill-fated ZUM. The paradox of it all, Tekere invited Mutasa, home village boy, as the war effort crested into final victory against racist Rhodesia. Tekere saw comfort in having a boyhood associate make it to the top hierarchy of the winning party. The plucky and fearless Tekere had in 1975 accompanied President Mugabe as a key aide, braving Rhodesian border patrols in the Kairezi-Nyanga area to cross into Mozambique. They both had an important assignment to resume the armed struggle from where assassinated Chitepo had left after falling victim to the menacing Détente Exercise of Henry Kissinger who, with uncanny plotting, strove hard to stave off the inevitable collapse of the white minority racist regimes of Southern Africa.
It would have made sense for pretentious Mutasa to wait out a few more months of the impending end of the war in 1978. In the event Mutasa would have flown home from years of exile in London direct back home to Harare. I am tempted to think a James Bond type in Britain must have tipped him about the imminent demise of racist white Rhodesia. So ducking the fate of just being another returnee from years of colonial refugee, he went on to cunningly assume the mantle of a great liberator and revolutionary by sliding into the ranks of the triumphant fighters.
Not surprisingly for the glorious heroism of the times went on to rub off him. It got into his head and he soon started positing as one of the great combatants of Chimurenga II. Truth be told, he had completely no role in that epic struggle coming as he did at the very tail end of that epic African military encounter.
On arrival in Maputo, he kept faith with his cowardly façade by refusing to inhabit the shared residences of either Zimbabwe House or Kim Il Sung or  Agostinho Neto Avenues. Employing his proximity to Edgar Tekere, he wrung out a private residence for him and so he could “paramour his beautiful wife away from the watching Zanla guerilla comrades.”  For everyone else long used to duck the murderous raids of racist Rhodesian security forces, we saw Mutasa as seeking a safe haven far removed from possible bombing by the marauding racists.
Thus long into national independence, Mutasa would pay back Tekere’s home village indulgent generosity by encouraging the inculcated ambition of the Secretary of Administration to break away from the Zanu-PF Party. He went on to form ZUM in direct challenge to President Mugabe. The quest for power became stronger than shared revolutionary bonds. In the event, Tekere’s political challenge fizzled out. Thereafter he lapsed into political obscurity and to a personal poverty that went on to rely on the kind and forgiving Mugabe. He would eventually die in political wilderness. Ironically he owes his national hero status to the same Mugabe he had been misled to despise by the feckless Mutasa.
The second political scalp from among the ranks of Zanu-PF cadres to be claimed by the same Mutasa is that of the vainly ambitious but completely clueless Simba Makoni. Like Edgar Tekere, home village politics came to play. The latter formed Mavambo to challenge Zanu-PF and its iconic revolutionary leader. He hoped to somehow garner votes that could have given him the clout to negotiate a coalition government with Tsvangirai’s MDC. He went on to flop dismally.
Now ever the busy body, Mutasa he has been angling to abuse the illustrious record of another cadre, the Vice President Teurai Ropa Mujuru. In a scheme that sidesteps fellow comrades who fought alongside her, there is some coaxing at instigation of Mutasa and cohorts on VP Mujuru to make her challenge H.E, Mugabe. This conspiracy is directed at the man who has given VP Mujuru post-independence high offices from the onset of the Republic, an honour and recognition that has not been accorded to (any) of her peers.
This clandestine action is just way out of the collegiate consultation that is the hall mark of ex-Zanla revolutionary conduct. If caution is not to be exercised, the reckless Mutasa and his hair brain plotting may well succeed in destroying another prominent party cadre. How Mutasa has become adept at this game.