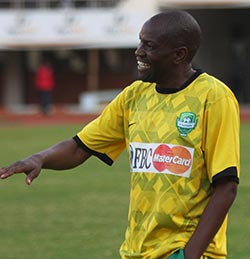 LLOYD Mutasa has resigned as Castle Premiership side FC Platinum coach.
In the interim, he has been replaced by Patrick Mandizha, formerly of Shabanie Mine who was in charge of the club’s junior development programme.
Mutasa, who has been in charge since last year, presided over five wins, 10 draws and three losses this season. He leaves the team in sixth position with 25 points, seven away from the leading trio of Highlanders, ZPC Kariba and Dynamos.
He led the Zvishavane based side to two trophies this season-the CG Msipa Charity Shield and the Independence Trophy.
A statement from FC Platinum read: “FC Platinum regrets to announce the resignation of the head coach Lloyd Mutasa who today, Thursday 7 August 2014, advised club president George Mawere of his intention to step down from the team following what he believed was its failure team to live to its full potential.
“Mr Mawere who has since accepted the resignation has appointed interim coach Patrick Mandizha who is currently assistant coach in the junior development program.
“A substantive coach will be announced as soon as the executive identifies a suitable candidate to take over the position.
“The club executive and management wishes Lloyd Mutasa the best in his future endeavours and hopes he will continue to work with the club in its quest to fully unlock the potential in its junior players some of whom have been promoted to the senior team.
“Club president Mawere has appealed to FC Platinum fans and partners to continue supporting the team and remain calm as it goes through the transition period.”
Luke Masomere was at one time this season rumoured to be on his way to the platinum miners.