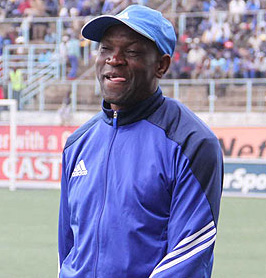 DYNAMOS coach Lloyd Mutasa believes his team has the right foundation to wedge a strong challenge, for silverware next season.
The Harare giants capped their season with a fine outing on Sunday when they beat bitter rivals Highlanders 3-2 on penalties, in a challenge match to commemorate the latter’s 90-years anniversary.
Following a 2-2 deadlock in regulation time, the match was pushed to the lottery, where Highlanders’ Brian Banda, Ralph Matema and Rahman Kutsanzira missed their takes.
Dynamos endured a trophy less season this year, in which they also finished fifth on the PSL log, to mark their worst ever season in a decade.
While Mutasa’s future is uncertain at Dynamos, while the club also could lose about five key players, who have their contracts running out at the end of the year, the coach believes the club has good material to win trophies next season.
“If you look at the youngsters we gave a chance this season, you will realise the potential this team has. Most of them had no premiership football experience but they played some big matches and performed well,” Mutasa said.
“That shows next season could be a good one for Dynamos. I would like to believe that the youngsters gained a lot of experience this year and that could work well for next season, where they can even go on to win the league title. As a coach I could see that their confidence was now high up there as we finished the season. Even their commitment has been so inspiring.”
Young blood like Peace Makaha, Takunda Sadiki, Tawanda Macheke and King Nasama are expected to be instrumental in Dynamos’ quest for honours next season.Advertisement