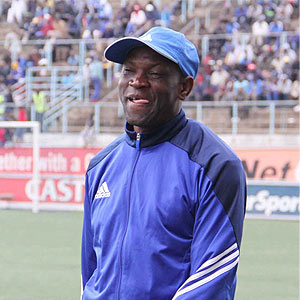 DYNAMOS coach Lloyd Mutasa looked unperturbed at the grim prospect of losing his job after leading his team to a 2-0 win over Tsholotsho at Rufaro Stadium on Wednesday.
Mutasa went into the match almost certain that he would be fired after the match but, managed to win and save his job for another day, following goals by Takunda Sadiki and Tawanda Macheka.
Chaos reigned in the Dynamos camp as assistant coach Murape, surprisingly sat on the bench despite being fired on the eve of the match, by president Kenny Mubaiwa.
Club board of directors chairman Bernard Marriot however, reversed the decision to axe Murape who was graciously welcomed by fans as he entered the pitch, as well as after the game.
After Murape had been fired on Tuesday night, Mutasa was expected to follow him through the exit door after the Tsholotsho match.
“As a professional you passionately discharge your duties, even when you know you will be fired. I was not fired so I simply did my job to help Dynamos win,” Mutasa said.
“I did not let anything else occupy my mind but, concentrated on the assignment at hand. Even players I told them not to worry about me getting fired. I told them to play for their names because they have a lot to achieve in their careers. Everything came out well and the fans went home happy.”
Mutasa’s future is not yet secure as he leads Dynamos to a stern test in Saturday’s visit to leaders FC Platinum at Mandava Stadium.
A defeat might end Mutasa’s reign as Dynamos coach.