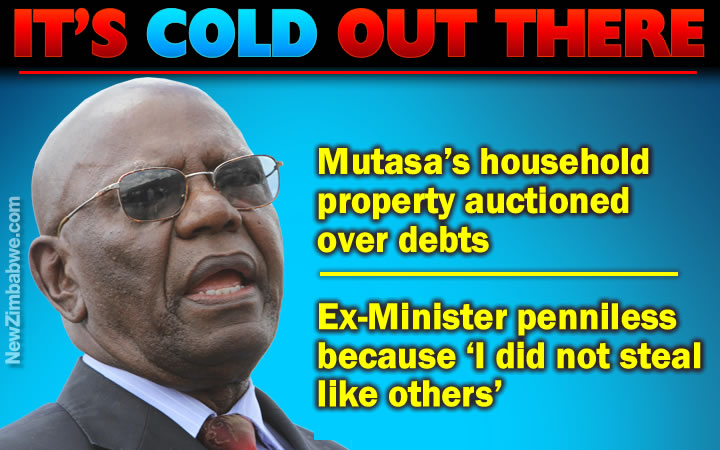 FORMER Zanu PF secretary for administration and ex-cabinet minister Didymus Mutasa will see his furniture auctioned this weekend over thousands of dollars owed to his lawyers.

This is the second time the property is set to be auctioned.

A year ago, Mutasa blocked another sell-off after filing for rescission on the judgement, arguing that some of the furniture belonged to his wife.

The former ruling party strongman says he is unable to pay his debts because he did not steal while in government.

“When I was in government I did not steal even a penny like others and soon I won’t be able to buy food for my family,” he said on Wednesday.

Following independence in 1980, Mutasa served as Speaker of Parliament for a decade until 1990 after which he was appointed to various cabinet portfolios until his expulsion from Zanu PF in 2015.

He owes a Harare legal firm $29,600 in outstanding fees after the attorneys represented in his fight against expulsion from the ruling party three years ago.

The former Zanu PF politician has failed to settle the bill resulting in household property being attached for action.

The development comes days after power utility ZESA dragged Mutasa to court over an unpaid $69,000 electricity bill including.

The bill is for his Headlands Farm.

A former close ally of ex-president Robert Mugabe’s close ally for more than five decades, Mutasa expelled from Zanu PF in February 2015 on allegations of trying to topple the veteran leader.

The former security minister is however, on the verge of re-joining the ruling party after an invitation by the war veterans’ association.