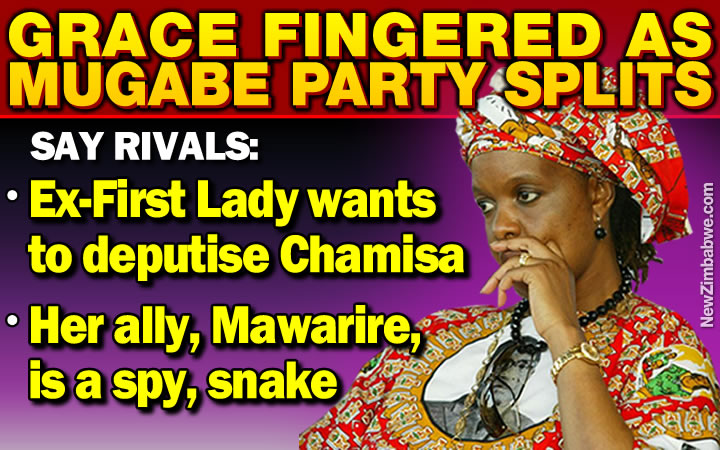 This comes after Mawarire, NPF spokesperson, announced Friday morning that the party had recalled Mutunhiri because he was working hand in glove with former local government minister Saviour Kasukuwere to scuttle coalition talks with the MDC.

Speaking to Journalists soon after his ‘recalling’ in Harare, Mutinhiri and his colleagues dismissed Mawarire’s claims. Mutinhiri said he formed the party and only people had the mandate to remove him through an election.

“I am the founder of the NPF party and no-one would take over the party unless elected by the people. The coup was one big problem that needed to be corrected. It is being irresponsible to give weapons to the soldiers. Weapons belong to the people.

“I am the founder of NPF after the army took over from former president Robert Mugabe in a coup. I am the first person who called it a coup and the first person also to leave Zanu PF voluntarily after I realised that what had happened was wrong,” said Mutinhiri.

NPF political commissar Jim Kunaka called Mawarire’s press conference as a non-event further alleging that Grace has been paying the NPF spokesperson so that he diverts the party to MDC Alliance.

“Grace Mugabe has taken us to this position we are in today. She has given them some money so that she gets the vice president’s post in the MDC Alliance coalition. I will not allow Grace Mugabe to lead us. We are not after money.

“We are quite aware negotiations for this coalition took place in South Africa. What Mawarire and crew have done is rubbish. That is nonsense. Mawarire has destroyed many parties and many people have not been spared too.

“He loves money, but we cannot always allow bacon in one family. He destroyed Mai Mujuru. Today, we have just discovered that he is a spy/snake. We are behind our President Ambrose Mutinhiri,” said Kunaka.

Kunaka said leadership cannot be fired without a constitution.

NPF Secretary for Masvingo Province Amasa Nenjana who is backing Mutinhiri had this to say: “Nedzoi kuMDC. I thank you Chamisa for accepting Mawarire and cabal. You have relieved us. At least we can rest for now.

“Mawarire is good at destroying parties and causing confusion among political parties for personal gains. He is just a journalist trying to make a living. When he speaks next time, he is no longer speaking on behalf of our party NPF,” said Nenjana.

The NPF political commissar Jim Kunaka advised Mawarire not to use the party name as he joins Chamisa’s MDC Alliance.

“Go to the Alliance as a person and do not drag everyone from NPF because you no longer represent the interests of NPF. We respected you and your cabal but, from now on, do not use the NPF name.

Meanwhile, NPF said it would hold its people’s Consultative meeting at the City Sports Centre this Saturday to elect its new leadership.

According to Mutinhiri, “Mawarire, Shadreck Mashayamombe and Jappy Jaboon have dismissed themselves from the party and by Saturday afternoon, a new spokesperson will be chosen.”

Earlier this week, Mawarire and other party members joined the MDC Alliance march for reforms in what was said to be the biggest demonstration since the coup.

It is quite laughable that people who are being used by the Junta rush to say I am a spy. For who? I thought they used to say I spied for President Mugabe, so who am I spying for now?

It is common knowledge that Saviour Kasukuwere is a former CIO whose return coincided with spirited efforts by the Junta to destabilise NPF. It is also a fact that Jim Kunaka worked with the army during his Chipangano days.

Wonder Mashange was CIO and Mutinhiri himself is a former soldier so who has links to the current military regime, these guys or me? Mutinhiri was recalled by the National Founding Executive Committee not Mawarire and anyone who believes Mawarire or Mutinhiri has powers to fire anyone outside resolutions made by the NFEC has surely not read the NPF constitution.

As the spokesperson, I read resolutions made by the NFEC in accordance with section 33:1 of the party’s constitution. Surely one doesn’t need to be a spy to speak on behalf of a party and I don’t think parties look for spies when they appoint spokespersons.