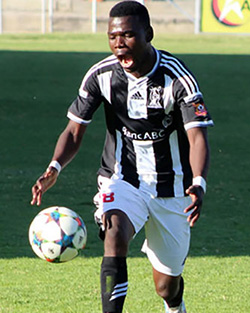 REIGNING Zimbabwe Premier Soccer League top goal scorer and Highlanders striker, Knox Mutizwa, has impressed South African premiership outfit Bidvest Wits.
The Bosso striker has been on trials with the South African club for four days and his agent
Gibson Mahachi said Monday that the player did well during his trials but would be going back this week for a final assessment.
“The young man did very well. He has impressed and they want him back for final assessment this week,” said Mahachi.
The 21-year-old returned from South Africa on Friday ahead of the Easycall Cup semi-final encounter against perennial rivals Dynamos at Barbourfields and scored one of the goals in the 2-1 victory over the Harare giants.
Veteran striker Obadiah Tarumbwa scored the other goal.
Mutizwa who has also been linked with a move to Sweden is this year’s winner of the Golden Boot Award after scoring 14 goals during the just-ended season.
Two other South African clubs are also understood to be interested in the Highlanders striker, who was selected among the country’s eleven soccer stars.
Mutizwa is a product of the Highlanders juniors and recently renewed his contract with the Bulawayo giants.Advertisement