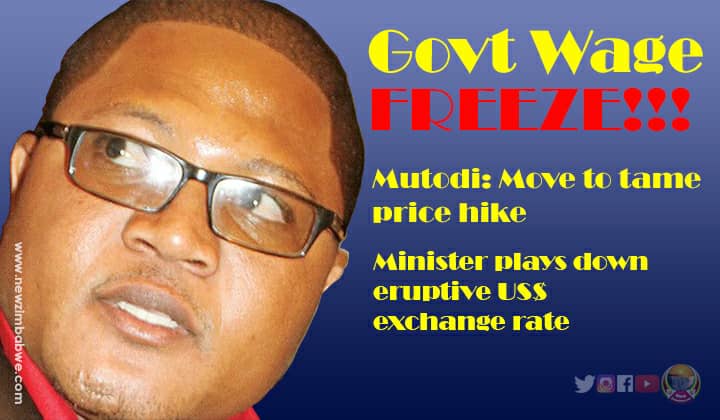 INFORMATION and Publicity deputy minister Energy Mutodi has revealed government was planning on a salary freeze for all civil servants in attempts to tame run-away price increases that have been witnessed lately.

The Zanu PF MP for Goromonzi West was speaking during a discussion programme on ZBC’s PowerFM Thursday.

“Government wants to maintain its current costs at constant, it wants to freeze its costs then find ways of increasing its revenue base.

“What it means is that there is going to be freezing of salaries for the civil service,” Mutodi said.

In July, government awarded soldiers a 22,5% pay rise while police saw their pay go up by 20% with teachers and other civil servants receiving a 17,5 % salary increase.

The lowest earning civil servant currently gets around $300.

However, the elevated salaries have been dwarfed by recent price increases partially blamed on Finance Minister Mthuli Ncube’s controversial decision to downgrade US dollar bank balances to the much dreaded local currency.

The economy also took a knock when the Treasury boss also announced a 2 percent levy on all electronic transfers.

The resultant commotion has seen prices shoot through the roof with shortages in fuel and other basic commodities also being experienced.

The spiralling US dollar exchange rate has not helped matters either as US$100 Thursday could fetch $500 in bond notes and higher for RTGs transfers.

While Minister Ncube has not yet announced the wage freeze, Mutodi, a close ally to President Emmerson Mnangagwa, may have blurted out the pending government policy directive.

Mutodi further disputed evidence of the spiralling US dollar exchange rate on the black market while contradicting Ncube on the status of the Zimbabwean currency.

“Why we are saying this is that anyone who is earning their money via RTGs can get into any official shop and buy goods at a rate of 1:1.

Meanwhile, after some industrial action by nurses and teachers earlier during the year, government could be headed for another showdown with its employees next month when civil servants expect bonus payments as has become the norm.

In previous years, government has had to stagger payments of the 13th cheque for its workforce as a result of the economic challenges that have seen almost the national purse chewed by a giant government wage bill.