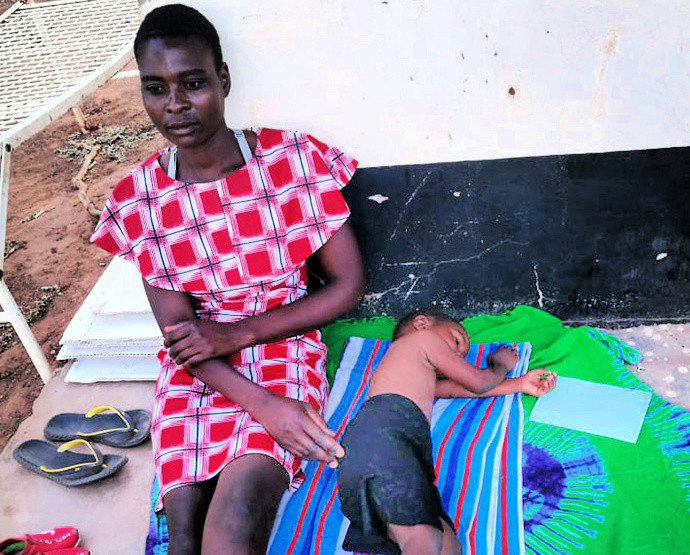 Martha Banda, 26, and daughter Priority Chimombe wait to go back home to Chaparapata Village after the 3-year-old was treated for malaria
Spread This News

CLINICS in Mutoko are reportedly turning away patients seeking treatment for malaria in fear staff could be infected with the deadly coronavirus.

Patients suffering from malaria have similar symptoms with those with Covid-19.

Malaria patients have resorted to seeking treatment at Nyadire Mission Hospital in the same district.

This has seen the hospital failing to cope with the high number of patients visiting the medical facility for malaria treatment. Cases have almost tripled compared to the previous two years, according to hospital authorities.

Nyadire Mission Hospital superintendent, Larry Tanyanyiwa said there were 14 809 cases between January and April this year in Mutoko district, compared to 5 817 and 4 756 during the same period in 2019 and 2018, respectively.

“We have seen an outbreak of malaria since March and we have so many patients coming to the hospital. These include children under the age of five and even expecting mothers,” he said.

“At Nyadire Mission Hospital, the high number of admissions have been exacerbated by the surrounding clinics, which sometimes turn away patients due to the fear and stigma of Covid-19,” Tanyanyiwa said.

“The signs and symptoms of the two diseases, which are separated by a thin line, have added to the scare. At the hospital, we are not taking any chances; we are testing for both Covid-19 and malaria.”

However, he noted that the hospital was having challenges due to shortages of malaria medication and rapid diagnostic test kits.

“Currently, we do not have any external assistance except from the government. As a faith-based institution, we are using the little we have and working around the clock to save lives,” he said.

“The clinic is overwhelmed because of an outbreak of malaria in the area and, so far, 653 people have tested positive for malaria from 1,172 suspected cases.”

She noted the 20-bed clinic has a catchment area of about 7,500 people. Of the 653 who tested positive in March and April, 166 were under age five, a number she said “is highly alarming”.

“The last outbreak was in 2017. We thank God that this year we have not yet experienced any deaths.”

“When I realised that she was not well, I then used the skills which I was taught by the village health workers to confirm whether it was malaria,” Banda said.

“However, the village health worker could not give me coartemether tablets (a medicine for treating malaria), because my child was too young, but referred me to the clinic. The clinic confirmed that she had malaria and she was treated and is on her road to recovery.

“I am suspecting she got malaria infection at home since I do not have mosquito nets or mosquito repellents.

“I wish I could have both, but I cannot afford them.”