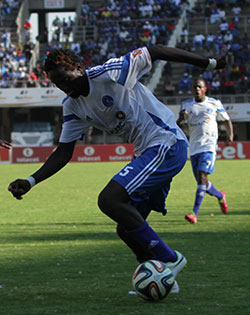 DYNAMOS’ returning forward Roderick Mutuma has declared war on Caps United ahead of the two clubs’ derby clash at the National Sports Stadium on Sunday.
Mutuma announced his return to the Harare giants with a goal in last Sunday’s 2-1 win over Black Rhinos as he also hinted an end to Dynamos’ attacking woes.
Caps last beat Dynamos in the league in 2009 and Mutuma has taken part in the derbies in 2011 and 2012.
“I arrived here in 2011 and found a winning culture that does not allow the club to lose to Highlanders and Caps united. I just want to continue cementing that culture,” Mutuma said.
“I hope to positively contribute in the next match against Caps United so a goal or two will do. The fans should just rally behind us and we will not disappoint. We really need the three points so we will give it our best shot.”
Inspiring for Caps however is that they are unbeaten in their last four matches in which they have recorded outright wins.
Despite eagerness to end Dynamos’ dominance on them, Caps would also be keen to justify beating Dynamos 1-0 in the ZNA Charity Shield semi-finals in May.
Fixtures
Friday:  ZPC Kariba vs Chicken Inn (Rufaro)
Saturday:  Harare City vs Hwange (Rufaro), FC Platinum vs Shabanie Mine (Mandava)
Sunday: Caps United vs Dynamos (NSS), Black Rhinos vs How Mine (Rimuka), Buffaloes vs Chiredzi (Chiredzi), Triangle vs Chapungu (Chapungu), Highlanders vs Bantu Rovers (BF)