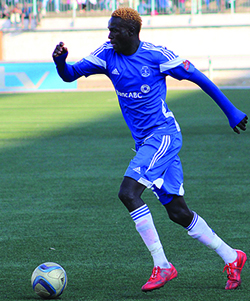 DYNAMOS forward Roderick Mutuma has insisted talks of his alleged indiscipline will not negatively affect him as he braces up to help Dynamos sail through the crucial stage of the season.
The Harare giants are fighting on two fronts, seeking to defend the league title for a fourth consecutive season as well as chasing the Chibuku Super Cup.
Despite being labelled hot-headed following a recent training ground brawl with fellow striker Takesure Chinyama which invoked memories of another training bust-up with former captain Murape Murape last season, Mutuma has remained defiant by rising to the occasion where it matters most.
Two weeks ago soon after being accused of failing to maintain his cool against Chinyama, Mutuma scored the all-important goal that saw Dynamos overcome Chicken Inn to close in on the leaders to just four points as six games before the league race reaches the finishing line.
The lanky forward was back again to strike when his goal last Sunday separated Dynamos from Chapungu to help them storm into the Chibuku Super Cup final.
“I will not let anything distract me from my job of scoring goals. This and that can be said about Roderick Mutuma but I will remain focused,” Mutuma said.
“I am used to such talk that I have no discipline but I will never let it affect me. I accept criticism when I go wrong but not in a negative way.
“Sometimes things just happen in the heat of the moment because of pressure but I will always respect my coaches and teammates because I believe in teamwork.
“Takey (Chinyama) and I are good friends and we will continue fighting for the team.”
Mutuma has been rewarded for his recent good form by Warriors coach Callisto Pasuwa who included him in the squad to face Lesotho in a Chan qualifier this month.