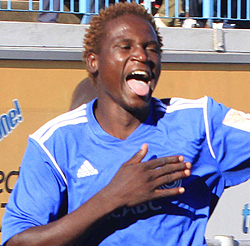 RODRICK Mutuma has reportedly attracted the interest of a number of clubs in Zimbabwe with champions Dynamos leading the pack but the lanky striker says his heart remains blue.
Some unnamed South African clubs are also reportedly interested in the Zimbabwean international forward, who has been on the books of South African Premiership side Bloemfontein Celtic.
Mutuma is back in Harare and has been training with Dynamos this week as after he was released by South African club.
The lanky forward who won the Golden Boot Award in his last season with Dynamos before securing a contract in South Africa is a free agent and reports suggest rivals Caps United have also developed interest.
The 26 year-old joined the South African club during the January transfer window last year.
The Zimbabwean international was signed by then Celtic coach Clinton Larsen, but has struggled for game time since the arrival of Ernst Middendorp, playing just two games since the German coach took over this year.
Now he has returned home where a number of clubs are reported to targeting him as he seeks to resurrect his career. Some South African clubs are also reported to be keen on signing him on.
Mutuma though says his heart remains with Dynamos.
He said: “The first team that came into my mind when I decided to return home was Dynamos. They did a lot in my football career.
“They raised me to become what I am and I think it’s only fair that when you are faced with a situation like this, I have to put them first. I will forever be grateful to them because they nurtured me.
“My manager Edzai (Kasinauyo) is handling the issue, but I hope to join Dynamos. I have already spoken with the coach and something is being worked out.
“I decided to leave Celtic because of lack of game time. I wanted to play, but the coach didn’t give me a chance but life has to go on. It happens in football.”
Dynamos strikers are struggling in front of goal and have scored just one goal following a 1-0 victory over How Mine in the opening match of the campaign with that goal coming courtesy of an own goal.
DeMbare then suffered a shocking 1-0 defeat in the second match to lowly ZPC Kariba who won promotion into the topflight league last season after winning the Zifa Northern Region Division One league.
Advertisement