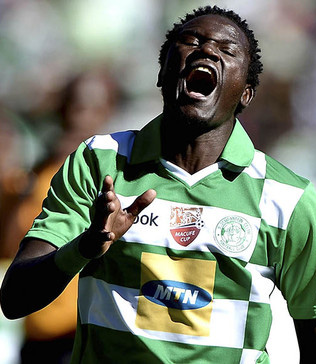 CAPS United striker Rodreck Mutuma is relishing round two of the clash against his former side Dynamos this weekend in the final of the Bob91 Super Cup at National Sports Stadium this Sunday.
The final has been initially set for Rufaro, but the organisers now want the bigger NSS.
Mutuma joined the green half of Harare after failing to agree terms with Dynamos following the expiry of his six-month contract last December.
He had arrived from Bloemfontein Celtic of South Africa where he failed to make an impact and had his three year deal cancelled.
Since joining Caps he has scored twice-the first being a penalty in the shootout against Dynamos in the Sino-Zim Cement Cup final two weeks ago. Caps won 6-5.
Then on Sunday, he scored the opener in the 2-1 defeat of Highlanders in the Bob91 play off at Barbourfields and he believes he is slowly getting his confidence back.
“I think I am doing fine, two goals in two matches against big teams is good for me. I am looking forward to the final against my former team and I hope we will win again,” Mutuma said on Tuesday.
He spoke highly of British coach Mark Harrison and the experienced Leonard Tsipa.
“The coach is good, he builds confidence and I think with time we will be unbeatable,” he said.
“We just need to take each game as it comes because the season has not yet started so we don’t want to be over confident.
“Leo (Tsipa) is experienced and you saw how he changed things against Highlanders and I will benefit from playing with him.”Advertisement