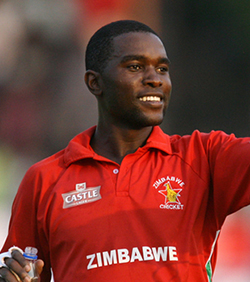 Zimbabwe 229 for 4 (Mutumbami 74, Chigumbura 49*, Hamza 3-47) beat Afghanistan 223 for 8 (Noor Ali 56, Chisoro 2-40) by six wickets
A STROKE filled 74 from Richmond Mutumbami and some sensible batting during the middle overs from Sean Williams (39) and Elton Chigumbura (50 not out) helped Zimbabwe take a 2-1 lead in the five-match One-Day International series against Afghanistan at the Queens Sports Club in Bulawayo on Tuesday.
Chasing 224 for victory in the third ODI, Zimbabwe left it late, but crossed the line with two balls to spare with six wickets in hand.
Zimbabwe made a promising start to its innings courtesy a 40-run stand between Chamu Chibhabha and Mutumbami before Chibhabha was given out handling the ball, a rare form of dismissal that has taken place only twice before in ODIs.
Mohinder Amarnath was the first batsman to be dismissed handling the ball in an ODI, against Australia in 1986, and Daryll Cullinan became the second, in 1999 against West Indies.
Chibhabha had chopped the ball from Amir Hamza in the tenth over and, as it headed towards the stumps, he stuck his hand out and tossed it away. Afghanistan was quick to appeal and Nigel Llong, the umpire, had no hesitation in giving Chibhabha out for 18.
Hamza then accounted for Craig Ervine, but Mutumbami looked in fine touch as he stroked his way to his half-century before he was dismissed by Hamza after a 92-ball knock that had four fours and two sixes.
Zimbabwe still needed 107 runs from 22.4 overs at that stage.
At 117 for 3, the onus was on Chigumbura and Williams to ensure Zimbabwe didn’t suffer a collapse like Afghanistan had earlier in the day.
The two didn’t disappoint, and stitched a 61-run stand for the fourth wicket to take Zimbabwe 46 runs away from victory before Williams fell.
Trying to up the scoring rate, Williams was caught at long-on to give Hamza his third wicket.
But Sikandar Raza, who walked in next, went about his business calmly and made 29 off 23 balls to shepherd Zimbabwe to victory in collaboration with Chigumbura.
Chigumbura got to his 20th ODI half-century in the last over, bowled by Dawlat Zadran, before Raza sealed the deal with a six.
Earlier, Afghanistan, after opting to bat, made a steady start with Mohammad Shahzad (30) and Noor Ali Zadran (56) scoring 51 runs for the first wicket. However, Williams, picked in the side after passing a fitness test, bowled Shahzad in the 14th over.Advertisement

Noor Ali and Mohammad Nabi then ensured that the team built on the good start and added 73 runs for the second wicket before Tendai Chisoro bowled Noor.
Afghanistan needed to kick on from there but Zimbabwe bounced back beautifully.
Chisoro dismissed Nawroz Mangal two balls after getting rid of Noor Ali and then Luke Jongwe had Asghar Stanikzai caught behind in the next over. Afghanistan had slipped from 124 for 1 to 124 for 4.
Nabi was run out for 42 soon after, but Shafiqullah Shafiq’s 32-ball 35 and Dawlat’s unbeaten 18-ball 23 lifted Afghanistan over 200.
The fourth match of the series will be played at the same venue on Thursday.