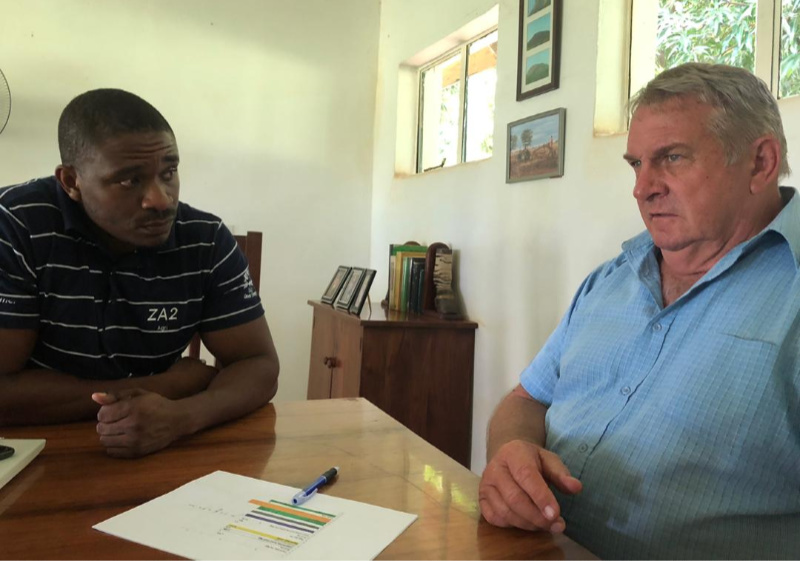 ZA2-Agri Chief Operating Officer in a meeting with Chief Executive Officer of the Drummond Group, Ken Drummond
Spread This News

The young financial face of Drummond, was born and bred in Muzarabani and attended Machaya Secondary school.

Never in his life did Pardon dream of becoming a successful farmer with knowledge of modern techniques, which are climate change friendly.

Being a local, Pardon saw opportunities of agricultural growth when Drummond took over the Muzarabani Estate owing to the smart agricultural techniques by ZA2-Agri.

Chigwara recently took over 48 hectares of his uncle who is now very old, of which only 40 hectares is arable.

The ownership of the land qualified Pardon to take part in the small-scale farmers scheme led ZA2-Agri as well as Drummond Group.

“I think with this programme, we can be able to increase our hectares so that we can have as many as we can of those small scale farmers to join this program and produce more groundnuts to sell.

We have a number of children in the area who are failing to attend school as they cant buy books, pay school fees but with the potential shown in this program, more farmers can improve their farming ability,” Pardon Chigwara said.

This is the second year Pardon has benefited from the “Muzarabani Corridor” and already the young Accountant is a proud owner of two bulls and several heifers, goats and can now employ two helpers.

Pardon is yet to utilise all the arable land on his uncle’s farm but the small patch where he planted 25 kilograms of groundnut, looks well managed and with good rains, the yield is promising.

Another beneficiary of the program is Dominic Kufazvinei a former ARDA employee who used to get roughly 300kilograms per hectare worth US$ 180 per annum.

However after the intervention of the ZA2-Agri, Dominic is now producing 1800 kilograms, earning him US$ 1620 per hectare and the ability to employ two full time and four casual workers.

A visit to his land in Muzarabani proved if the anchor farm is well managed employing the agro-smart technology, not only small-scale farmers grow but also food security is guaranteed.

Ken Drummond the Chief Executive of the Drummond Group indicated that the rehabilitation of the Muzarabani Estate, a former ARDA project was meant to benefit out growers who are small-scale farmers from the local area. Ken is using his estate as the anchor farm in order for small-scale farmers to copy and produce quality crops.

“The out growers are just an extension to our fields, while their crops are growing ZA2-Agri with its extension services monitors, if they need advice we would be able to get it from universities, until they harvest the crop.

When they harvest the crop, they bring it back to us where they got the seed, and that crop gets marketed together with ours at the same price, we don’t deduct any commission as we are doing this for the community,” Ken Drummond said.

“Commercial farming is about creating surplus and not just producing food for your consumption,” Drummond added.

“We are extending our hand to commercialise agriculture, to increase outputs, to create markets, to bring in agronomic extension services where we are giving advisory to the small holder farmers,” Chirinda explained.

ZA2-Agri wishes to extend their idea to use smart technology in farming to other provinces in the country as well as countries within the region.

“What you witnessed here at the anchor farm in Muzarabani is a perfect example of what we are doing, where there is active and practical example of what can be done, in order to improve and develop rural areas,” Ryan boasted.

Currently the ‘Muzarabani Corridor’ is a 200-kilometre stretch taking advantage of a perfect Harare-Muzarabani highway for easy access to markets.

The project is taping into the data driven agricultural approach by ZA2-Agri in order for small scale farmers in the program to get some ground truths in order to maximise their yield.

This helps the farmers for produce crops with a similar quality as well as enhance greater chances of accessing finances as the data driven technology can also be used by banks to monitor progress on farms, thereby creating bankability of their land.