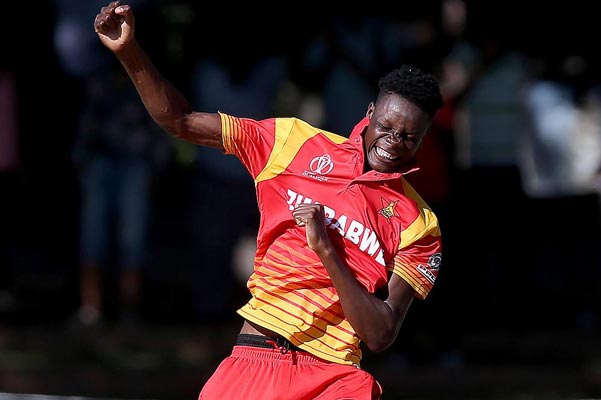 He becomes the first Zimbabwe player to play in the IPL after a span of eight years.

Former Zimbabwe player Brendan Taylor was part of Sunrisers Hyderabad’s squad in IPL 2014 but never played a single match for the Orange Army. He was subsequently released ahead of IPL 2015.

Ray Price (Mumbai Indians) and Tatenda Taibu (Kolkata Knight Riders) are the other Zimbabwe players who have participated in the IPL.

Muzarabani’s imminent move was confirmed by the Indian Embassy to Zimbabwe after the Chevrons star met India’s Ambassador to Zimbabwe with Vijay Khanduja before his departure for the IPL.

“Ambassador met with Blessing Muzarabani, the Zimbabwean bowler, as he prepared to leave for #IPL2022. The Ambassador wished him &amp; his team #LucknowSuperGiants the very best,’’ tweeted the Indian embassy.

The 25-year-old fast bowler, who initially found no takers during the IPL Draft, was signed by the Lucknow Super Giants as a replacement for England fast bowler Mark Wood who was ruled out of the IPL due to an elbow injury.

At Lucknow, Muzarabani will be under the mentorship of Zimbabwean legend, Andy Flower.

Muzarabani has also worked with Flower at the Multan Sultans in the Pakistan Super League.

Last year, the Zimbabwean duo won the PSL before they lost in the final of the 2022 edition by 42 runs to the Lahore Qalandars at the end of last month.

Indian batsman, KL Rahul is the Lucknow Super Giants captain while other notable stars in the team are South African Quinton de Kock, Jason Holder of the West Indies and Australian Marcus Stoinis.