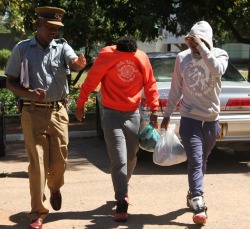 CAPS United striker Method Mwanjali is now a free man after attempted murder charges against him were withdrawn by the complainant, Tonderai Nhunzvi following an agreement that the player will cater for his medical bills.
Mwanjali was on remand over the past two months after he stabbed Nhunzvi twice in the stomach following an altercation over careless driving.
Nhunzvi withdrew his case before Regional magistrate Noel Mupeiwa.
However, Mwanjali will be back in the dock on June 24 to answer allegations of assaulting Lionel Muchena, a friend of Nhunzvi who was injured during the fracas.
In a medical affidavit filed in court Nhunzi wrote: “The accused person and I have since reached an understanding as he has agreed to pay my medical bills. I have since recovered from the attack and back at work.
“I have forgiven the accused person and do not wish to have him prosecuted.”
According to prosecutors, Mwanjali attacked Nhunzvi when he confronted his friend and team mate, Archford Gutu, for smashing his windscreen.
Nhunzvi and Gutu had an altercation after their cars almost collided at Long Cheng Plaza on April 17 this year.
Court heard that Nhunzvi tried to ignore Gutu who grabbed an unknown object which he used to smash his Altezza’s windscreen.
Nhunzvi’s friends, Muchena, Edgar Muchibwa and Marian Chikomo stopped Gutu from getting into the motor vehicle where Mwanjali was waiting.
Nhunzvi then confronted Gutu.
Gutu was in the company of Mwanjali who was not amused by Nhunzvi’s confrontation.
The court heard that Mwanjali went to his car and brought back a knife that he used to stab Nhunzvi twice on his stomach.
Mwanjali also cut Muchena on his right thumb when he tried to block Nhunzvi from being attacked.
After realising that they had committed the offence Mwanjali and Gutu fled from the scene and later went to Marimba Police Base to file a report of malicious damage to property claiming that their vehicles tyres had been deflated.
The duo was interviewed and later arrested.
Advertisement