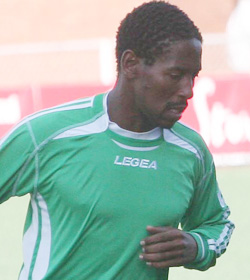 ZIMBABWE and Mamelodi Sundowns defender Method Mwanjali is likely to join Mpumalanga Black Aces in the South Africa Absa Premiership.
Mwanjali’s future has been a subject of debate after a life ban from the Zimbabwe national team after being found guilty of match fixing and is due to appear a Zifa Specials Appeals Committee on July 29 and 30.
He had recently signed a one year with Sundowns, but with coach Pitso Mosimane rebuilding and age not on his side, he has found himself surplus to requirements.
Further, the club needs to free up space for a foreign player, most likely his Zimbabwean counterpart Khama Billiat.
The former Zimbabwe Warriors captain started training with Aces on Monday and has reportedly already agreed personal terms with the club.
“He is here and expected to sign any time soon,” a source said.
Other Zimbabweans at Sundowns are newly signed Cuthbert Malajila, veteran Esrom Nyandoro, who has been given a new two year deal while Nyasha Mushekwi has been sold to a Belgian side.
Former Warriors striker and Under 23 coach Peter Ndlovu has also joined the Mamelodi Sundowns back room staff. He played for the club after his return from England and won the league title twice.Advertisement