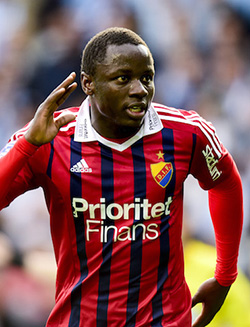 NYASHA Mushekwi continued with his fine scoring form at the weekend after slamming home the opener for his Swedish club Djurgardens IF in their 1-1 draw against Malmo FF.
Mushekwi struck on 39 minutes after some atrocious defending by Malmo defender Filip Helander who tried to clear a low cross from the left using his head only to mess up and present the Zimbabwean striker with one of the easiest chances of his career.
Malmo then found the equaliser through Magnus Eikrem after 53 minutes – a result that left both teams in the top five after 13 matches.
Mushekwi – who is on loan at Djurgardens from parent club Mamelodi Sundowns – remains the leading goal scorer in Sweden after stretching his total for the season to 10 goals.
The tall forward has scored his goals from 11 starts, really impressive for a striker who only joined the club at the beginning of the season after spending most of last year battling with a knee injury which forced him to cut short his loan spell at Belgian club KV Oostende.
The 27-year-old joined Djurgardens at the end of March and his goal scoring form has ignited interest from Allsvenskan leaders IFK Goteborg along with clubs from Holland and Germany.
“If I were to decide, I would like to play for Djurgarden all my life,” Mushekwi told Sports blade after 1-1 against Malmö FF on Sunday evening.
But KickOff.com has been told that his representatives favour a move to England for the man who scored 40 goals in 53 starts during his time at Sundowns.
Mwanjali looking for a new club

FORMER Mamelodi Sundowns defender Method Mwanjali, who is currently training on his own back home in Zimbabwe, is looking for a new club.
The former CAPS United defender has now parted ways with the Brazilians amicably, but wants to continue playing in the Absa Premiership.
The 2013/14 campaign Mwanjali spent a season-long loan at Mpumalanga Black Aces and the following season was not registered for the PSL with Sundowns
Mwanjali told Sport24 that he is keeping fit by training on his own while in search for a new club.Advertisement

“I want to continue playing in South Africa and I know I can still make it, it didn’t work well last time, but that doesn’t mean I can’t go back and play,” Mwanjali explained.
The 32-year-old defender was linked with a move to Mpumalanga Black Aces in the January transfer window but the switch failed to materialise.