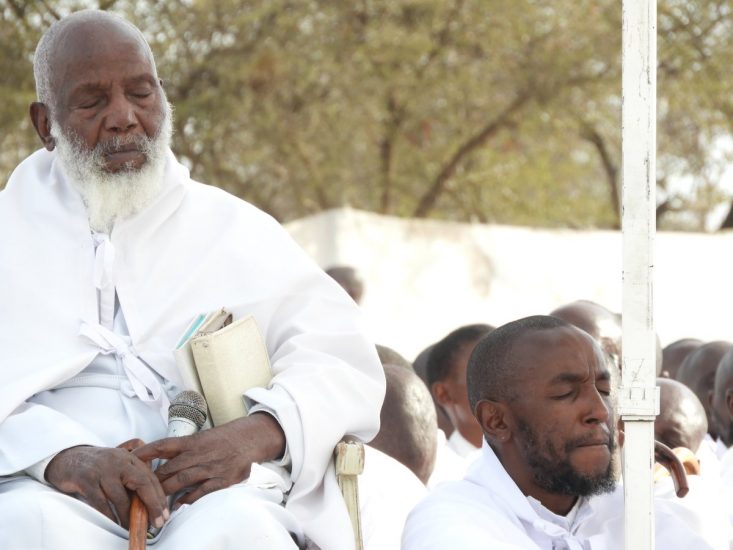 THE messy fight for the control of the African Apostolic Church (VaApostora VeAfrica)’s Holy Shrines, founded by Paul Mwazha has taken yet another turn after a rival sibling filed an urgent application seeking to stop the hisson, Alfred from hosting a three day mass ceremony this Friday.

Mwazha’s other son, Chiseko Mwazha, in an application filed with the High court last Thursday said he recently got wind of his brother’s intention to host a church ceremony at two of the church’s Holy Shrines in Manicaland and the Midlands Province.

In the application, Chiseko together with one of the church’s bishops, Patrick Mahachi cited Alfred, as well as Ngoni, Masimba and James Mwazha as respondents.

The petition comes at a time there is a leadership row in the church.

Last year the High Court nullified the appointment of Alfred as the leader and successor.

Unsatisfied with the outcome at the lower court, Alfred and members of his breakaway faction filed an appeal which is currently pending at the Supreme Court.

Also cited as respondents in the latest application are other members of the church’s leadership including Richard Juru, Elson Tafa, Charles Tekeshe, Lovemore Mharadze and Norman Siyamuzhombwe.

Chiseko, who is also a bishop in the church, is arguing that Alfred and the rest of the defendants should be barred from hosting the ceremony as it is a violation of the church’s constitution.

Reads the summons: “The Respondents want to go ahead with the mass gatherings starting from next week and we were advised late on the 15th of September that the Respondent’s followers invaded the property and started making arrangements to erect structure at Ndarikure Shashe Shrin and Mapambe Shrine.

“This is being done outside of the provisions of the church’s Doctrine, because only Archbishop Paul Mwazha can call such a meeting at these Holy Shrines. The actions of the respondents are against the Constitution of the church.”

Chiseko is also arguing that the gathering could prove to be a danger to the health of the church members as it could become a super spreader event where people contract Covid-19.

“The members of the church and their children and relatives will be exposed to Covid-19 infections by this super-spreader mass ceremony. The actions of the respondents pose a clear and present danger to the church as a whole because their name which is very well known will be harmful.

“As a Christian church the last thing church leaders want to be associated with, is breaking the law and Covid-19 regulations as well as chaos and violence that might arise there.”

He is demanding that the court cancel the church meeting and order Alfred and the rest of the defendants to vacate from the Shrines.