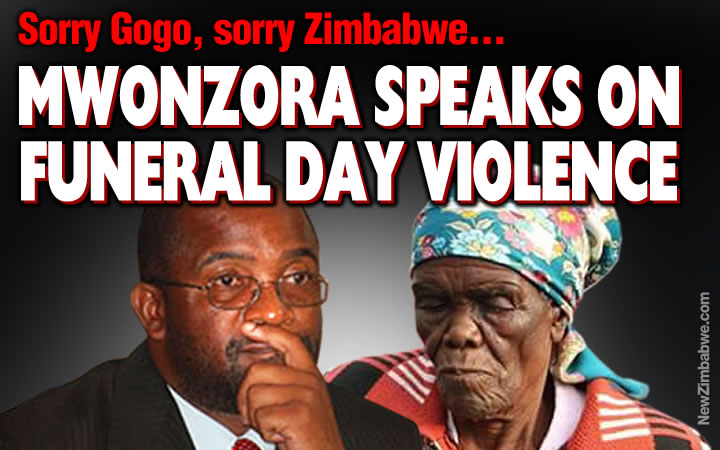 MDC-T secretary general, Douglas Mwonzora, has apologised to Morgan Tsvangirai’s mother for insults hurled at her during the late party founding father’s funeral.

Mwonzora made these remarks at the commemoration of the late Tsvangirai at Sapes Trust in Harare Thursday.

Mbuya Tsvangirai drew the ire of MDC-T activists after declaring she would not welcome the presence of party acting president Nelson Chamisa and her son’s widow Elizabeth Macheka.

She threatened to commit suicide but this was turned over and she became the subject of social media jokes and crude cat-calls during the funeral.

“We want to apologise for the insults hurled at Morgan Tsvangirai’s mother. Nothing can be more sadistic. I want to say Gogo we are very sorry,” said Mwonzora.

He said the MDC-T, while structurally and strategically strong, the party had culture deficits.

“We fall short on culture in terms of leadership selection. We fall short when something inconvenient comes your way.

“We want to apologise for breaking the hearts of many Zimbabweans who see hope in the MDC,” the party secretary general said.

“We want to apologise for the assaults on members of the public perpetrated by some youths in our name. I want to apologise to a police officer who was assaulted by a plate and left with a gush on her head. I want to say sorry to government officials who were insulted at the funeral”.

Mwonzora and first vice president Thokozani Khupe had to seek refuge in a hut after a mob attacked them at Tsvangirai’s funeral in Buhera. The former Nyanga North MP apologised to the attack especially on Khupe.

“I want to apologise for the treat, sexist and tribal assaults on Madame Thokozani Khupe. I was not harmed and if I was I think I deserved it but I know Khupe does not deserve such treatment and for this we are sorry,” said Mwonzora.

The MDC-T secretary general also apologised for verbal and psychological trauma that Tsvangirai’s widow Elizabeth Macheka went through at the hands of youths and partisan supporters during the funeral.