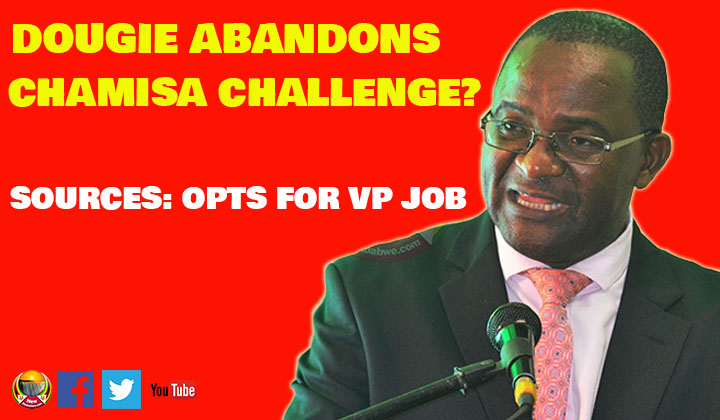 OPPOSITION MDC secretary general Douglas Mwonzora, who has been linked to a possible challenge for the MDC presidency against incumbent leader Nelson Chamisa, could be having a change of heart amid reports he was now settling for the much easier vice presidency job.

MDC holds its congress May this year with a Chamisa-Mwonzora clash being the highlight of the first elective process since the death of party founding leader Morgan Tsvangirai February last year.

Top MDC sources told NewZimbabwe.com Monday that Mwonzora’s strategic teams were in marathon meetings discussing the issue with a real possibility that the former Nyanga North lawmaker may abandon his challenge for the top MDC post.

“He has every chance to win and knows that. There have been a lot of mudslinging and back-biting which could divide the party right through the middle. Mwonzora will likely contest for the vice presidency,” a source close to Mwonzora said.

This comes just two days after the Harare lawyer was rescued by Chamisa at a party rally in Mutare where he was booed by a section of the MDC crowd.

Chamisa had to intervene and threaten to leave the rally if Mwonzora was not allowed to address the crowd.

Mwonzora’s supporters argue this was Chamisa’s way of trying to manage his rival.

“It was a sinister move with Chamisa’s fingerprints all over. Three bus-loads of people who booed Mwonzora were transported from Chitungwiza by known people.

“Mwonzora does not normally address these rallies but after realising the secretary general had been warmly received during introductions, someone realised the moment had been missed. That’s when the plan to get him to address the crowd came,” said the source.

But Chamisa’s spokesperson, Nkululeko Sibanda dismissed the suggestion that his boss had anything to do with the incident.

“Our president does not need a hired crowd. If anything, he does not have the money to do that. Chamisa is on the ascendency and any challenge on his candidacy will only work to diminish his standing not necessarily to defeat him. It’s a Zanu PF project,” said Sibanda.

Contacted for comment, Mwonzora could neither deny nor confirm he was having second thoughts.

“The issue of our congress has attracted so much attention some of it from undesirable elements. But it is also important to note that it has attracted attention from Zimbabweans because the MDC is a national institution.

“A people’s party and whatever we do as leaders will impact on the lives of the people who have sacrificed life and limb to keep the fire of democracy burning in our country against all odds.

“I have not been nominated yet for any position. However, what I can tell you for now is that I will be making an announcement on the issue in the next few days,” said Mwonzora.

He also confirmed he had been informed of the booing beforehand.

MDC spokesperson Jacob Mafume was not immediately available for comment on the issue.

Chamisa was appointed as vice president of the MDC in 2016 by Tsvangirai after losing the fight for the position of secretary general to Mwonzora in October 2014.