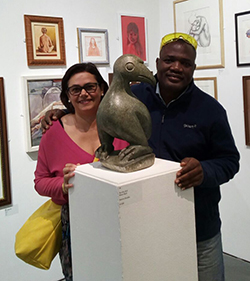 CELEBRATED Zimbabwean sculptor Tawanda Sarireni, along with his production collective Mystery in Stone, recently showcased another spectacular collection at the prestigious Mall Galleries in London.
The exhibition, titled Out of Africa, featured over a dozen significant pieces that are a culmination of more than two years of the artist’s intensive labour inspired by love, life, family and political hardships, and reflect the Shona Culture in Zimbabwe from the 1950’s right through to the present day.
“It was once again, a resounding success,” said Sarireni.
“It was such an honour and pleasure to debut our latest work at the Mall Galleries, which has become home to me and so many other artists.”
More than 15 sculptures were sold at the exhibition earlier this month, with art lovers only too happy to snap up their very own bespoke Mystery in Stone piece.
“A number of signature pieces were bought, including one titled the Politician. I think people were fascinated by the meaning behind it, but that is a story for another day,” Sarireni said.
“I was humbled by the turnout, including from media houses like CCTV who took the time to learn more about what we do.”

“The support and genuine enthusiasm from all those who took their time to come out, and who purchased our work is inspiring.”
“There is nothing more satisfying than seeing something you have produced come to life through the people you are selling them to,” he added.
Sarireni also held live demonstrations of stone carving throughout the exhibition week, allowing art enthusiasts to experience first-hand what goes into coming up with the final product.
Mystery in Stone has travelled around the world to much acclaim from art collectors and the public, and many of the exquisite hand-carved sculptures have featured in the most celebrated gardens and galleries, including Borde Hill Garden, RHS Garden, Hyde Hall and Oxford Gardens.
The group, established over a decade ago, have mastered the intricacy of interweaving colour, form, texture, essence, belief and emotion with stone.
Sarireni said the next stop is America in the next few weeks where he will unveil the Out of Africa collection in several key States including Texas.Advertisement

Well-known for his creative style in which he often provokes the viewer’s social, cultural and political awareness, Tawanda has been a sculptor and curator for two decades.