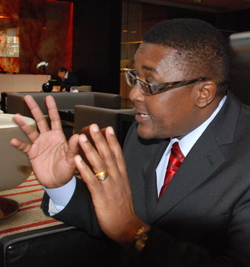 PARLIAMENT has sent a last-minute appeal with Germany to back Zimbabwe’s tourism minister Walter Mzembi as United Nations World Tourism Organisation’s (UNWTO) secretary general ahead of Friday’s election.
Apart from Zimbabwe, other candidates from countries such as Columbia, Korea, Georgia and Brazil are also vying for the post.
Parliamentary Foreign Affairs Committee chair, Kindness Paradza, pleaded with German ambassador Thorsten Hutter Wednesday when he appeared before the committee to lobby for Zimbabwe.
“We would wish you Germany to support our candidate,” said Paradza.
“We are not too late we have one or two days so there is no harm in you buttressing what we are saying as parliament of Zimbabwe to your minister of tourism who is already in Madrid I think.”
Although Hutter acknowledged Mzembi to be a good candidate, he was diplomatic in avoiding committing the German vote.
“Of course, I am aware of his candidature. I don’t know what will happen during those ballots. What I know is they are secrets ballots and no one has to come up saying I voted for him or her,” said the ambassador.
He added, “He (Mzembi) is a very good candidate and I understand that the lobbying of your government has been very professional. I don’t know what our colleagues in Berlin and the ministry of economics have decided.
“Of course, the other countries Brazil, Georgia, Korea they all have approached us. I think there is no decision taken yet and they will wait on how the meeting goes.”
The race now has five candidates after Seychelles withdrew its candidature. Georgia, Brazil and Zimbabwe are perceived as the major contenders.
After the initial election Friday, the two front runners will be put to vote and the winning candidate assumes the post.Advertisement