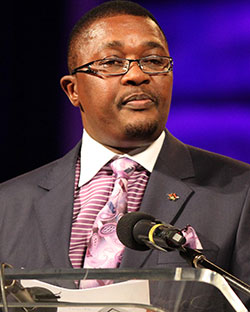 TOURISM Minister Walter Mzembi on Thursday bemoaned the lack of closer ties in promoting tourism between the current governments of Zimbabwe and South Africa.
Mzembi was speaking at the official launch of the National Tourism Policy in Harare.
He pleaded with his fellow government leaders to stop the invasion of tourist resort areas by politicians to allow his tourism dream to blossom.
The minister also lamented the continued lack of an effective tourism strategy by Zimbabwe, coupled with the recurrent policy inconsistencies that have cast the country as a risky investment destination.
Mzembi said before Zimbabwe got its independence in 1980, 70 percent of the country’s tourist arrivals were from South Africa.
“What pains me most as minister steering this sector is that apartheid South Africa and Rhodesia had a closer tourism relationship between its then white citizens than the one that we have between the blacks of independent Republic of South and Zimbabwe,” Mzembi said.
The launch was attended by Vice-President Joice Mujuru, who is the tourism patron. It was also attended by top business executives, tourism players and diplomats.
Mzembi continued: “There was clearly a deliberate political strategy, Your Excellency, and affirmative policy between Rhodesia, alive to its biting sanctions and Beitbridge border post then had to be responsive to this market.
“Even the roadblocks and checkpoints were friendly to that traffic for the intended purpose of supporting Rhodesia.
“Is it the case today, if history repeats itself, with independent Zimbabwe under sanctions?”
Mzembi said apartheid South Africa was also used to facilitate an unhindered traffic of international tourists into Rhodesia.
“That philanthropic tourism visit by the South African black middle class or assisting international arrivals to the extent that their visit to sister Zimbabwe is understood between, first and foremost, our revolutionary parties, ANC and Zanu PF as a sanctions busting visit that should help a sisterly state in need.”
The minister urged the media to stop casting Zimbabwe as a country in perpetual conflict. He also urged a halt in the invasion of the country’s tourist resorts.
“I know there is a lot of talk about places like Save Valley Conservancy and from time to time l have treaded in that turf calling for sanity,” Mzembi said.Advertisement

“We are not doing the bidding for the few remaining white investors but we are being streetwise in the national interest for that matter to keep the remaining 13 percent of this source of market for tourism in Zimbabwe from disappearing altogether; otherwise l don’t have a starting point.”
Save Conservancy, widely regarded as the richest and largest private wildlife sanctuary in the world, was invaded in 2012 by top Zanu PF officials.
Meanwhile, Mzembi said he was targeting $5 billion annually in terms tourism injections by 2020.
“I have a dream and a dream for the tourism sector and my dream is that by the year 2020, Zimbabwe’s tourism sector shall cost $5 billion in economic receipts and l align this dream to our vision 2020 implemented within the context of our ZimAsset,” he said.
The minister said he was benchmarking his estimates against South Africa’s current tourism annual harvests of US$12 billion against Zimbabwe’s US$1 billion.
Mzembi anchored his dream on the envisaged relaxation of Zimbabwe’s stringent visa regime, a heightened thrust towards domestic and religious tourism and plans to divert major airlines along the Zimbabwean route.
The tourism chief was dismayed that neighbours Botswana, Malawi, Mozambique, South Africa and Zambia continued to receive an average of between 80,000 to 150,000 Chinese tourists annually compared to Zimbabwe’s 5,500.
During her peak in 1999, Mzembi continued, Zimbabwe welcomed 27 percent of her international arrivals who were from Europe and America, but this has slumped to 13 percent.