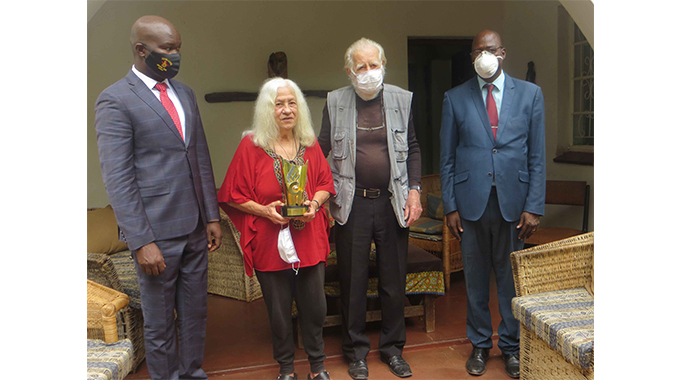 Dreck Huggins, third from left, died Tuesday, just a week after his wife passed on with Covid-19
Spread This News

His death comes a week after his wife, iconic painter, Helen Lieros succumbed to Covid-19.

The couple in 1975 established the Gallery Delta in Harare which he was Managing Director till his untimely passing.

In 1985 he became the inaugural director of the National Arts Council of Zimbabwe (NACZ), a post he occupied until 1988.

With a writing career spanning over decades, Huggins took a keen interest in writing short stories like Writing Still (2003) which is used as an Advanced Level English Literature set book.

His other prominent work includes Stained Earth (2005), Short Writings from Bulawayo volume I and II, Writing Now (2005) and Letters of Yvonne Vera and Dereck Huggins (2002-2004).

In his condolence message, NACZ director, Nicholas Moyo said he hoped the trustees of Gallery Delta will carry forward Huggins passion in promoting the arts sector.

“He (Huggins) subsequently became the founding director of the NACZ a position he held until 1988. He opened the Gallery Delta in 1975 with his wife, NAMA Legend Helen Leiros, for the promotion of contemporary painting and was its managing director until his untimely death.

“The sector will never be the same without Derek and we hope the trustees of the Gallery Delta Foundation for Art and the Humanities will be able to carry on the work of Derek and his wife to ensure the gallery continues to carry on their legacy of promoting the visual arts and young artists in Zimbabwe. May His Soul Rest In Peace,” he said.